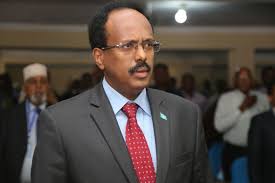 On four occasions the president of Somalia Mr.Mohammed Abdillahi Farmajo
has announced at different functions that he is ready to kick start the
stalled Somaliland/Somalia talks that have been boycotted by the president
of Somaliland H.E Musa Bihi Abdi. From the outset the Somalia government was vehemently opposed to the
tripartite agreement between multinational DP world and Somaliland
including Ethiopia. The Somalia government has engineered a confrontational
attitude from different perspective to makes sure Somaliland does not
benefit from the deal. It has partly succeeded since development projects
the UAE government was implementing in Somaliland have stalled because of a
vote by the Somalia handpicked parliament.

The last time Somaliland and Somalia met for talks was in 2015, and then
the talks were stopped prematurely because in the Somalia government
delegation there were some Somaliland nationals. Somaliland government
refused to talk with her citizens on the table and saw this as a ploy of
Somalia to undermine her on the negotiation table.

The talks were put on hold by the former presidents of Somaliland and
Somalia who were on their last leg of tenure so it was prudent for them to
wait for elections so that the newly elected head of states to continue
with the talks where they left.

It was hoped that the talks should start earnestly in March this year
however following Somalia war on Somaliland the government of Somaliland
decided to pull out of the talks. The president of Somaliland and his
Somalia counterpart were expected to start talks in a third country hence
Djibouti was chosen as the talk’s destination.

Up to now we do not have official confirmation from the Somaliland
government in response to the president Somalia Mr.Farmajo call to initiate
with Somaliland.

The first question that comes to mind is that the Somalia president calls
for a talk with Somaliland does it have any significance in terms of
interest for Somaliland to commence the talks?

The answer is simply yes, the time is right for Somaliland to return to
the negotiations table. Time has come for president Bihi of Somaliland to
positively accept the calls from Somalia to begin the talks.

The talks at this time are very important for Somaliland when looked from
different perspectives. Diplomatically the talks will eliminate the
political suspense and will invite any party that is interested in the well
being of the two sides.

It is important for a well thought venue for the talks and in this respect
president Bihi needs expertise to come up with a neutral country to host
the talks. Another thing to note is that the Somaliland delegations should
go to the talks with well prepared propositions to negotiate the interest
of Somaliland. Also the agenda of the talks should be prepared by
intellectual who are averse with negotiation tactics and updated with how
the world ticks in the 21st century. If Somaliland goes to th ie
negotiation table well prepared fruitful results can come out of the talks.

It is important for the country hosting the talks be a neutral one which
will listen to the two sides in an impartial manner. Not only is the
hosting country important but also the arbitrators should come from
different country that have stake in the talks so that whatever comes out
of the talks can could be implemented by both sides. The participating
countries will act as witnesses of the deal that is signed by Somaliland
and Somalia.

Diplomatically the talks are important because it will leave room for
negotiation open this will help Somaliland’s foreign policy to chart new
ways forward. The country’s foreign policy has lost direction and needs to
be navigated back to track.

Mr. President you have to come with a solid diplomatic agenda for
Somaliland to start talks with Somalia a foreign policy that can pass the
litmus test of verbal propaganda that is broadcasted through the media. You
have to start the Somaliland/Somalia talks but before hand you should come
up with a comprehensive plan that can sell itself.