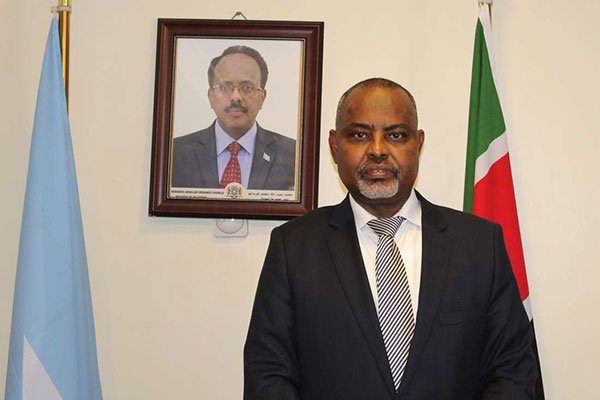 Mr Nur was expelled by the Kenya government, which also recalled its own envoy to Somalia, Lt-Gen (Rtd) Lucas Tumbo.

The ambassador arrived at Mogadishu’s seafront airport together with Somalia’s First Lady Zeynab Moalim, who was from a visit to Kenya, and Foreign minister Ahmed Issa Awad.

Mr Awad was reportedly on transit in Nairobi, on his return from Sweden.

Mogadishu was expected to issue a statement after the meeting.

An Indian Ocean maritime territorial dispute between Kenya and Somalia has escalated with claims that Mogadishu had auctioned oil blocks in the contested area.

The two states are each claiming some 62,000 square miles of the Indian Ocean, believed to be rich in oil and gas deposits.

The dispute was presented before the International Court of Justice (ICJ) at the The Hague in the Netherlands in April 2014 after dialogue failed.