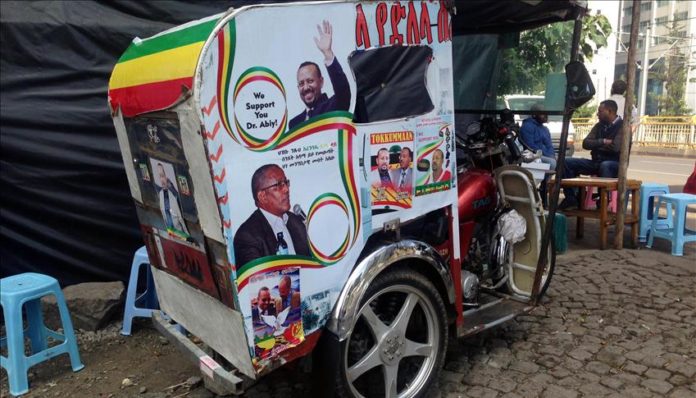 ADDIS ABABA, Ethiopia —The sun is shining bright on the Ethiopian capital, Addis Ababa. Commuters are stuck in rush hour traffic on a four-lane road adjacent to the historic National Palace, which has withstood putsches and political murders over the course of a century.

Its current occupant, reformist Prime Minister Abiy Ahmed, 42, is widely regarded as a popular leader who has unified the divided nation since he took office in April.

Dozens of armed red beret soldiers guard the premises and keep an eagle eye on the movement of traffic and pedestrians.

A mini-bus taxi on the road ahead is plastered with two stickers supporting Ahmed. One reads: “Prime Minister Abiy Ahmed, We support you.”

This is a common sight in the capital. Vendors across the city sell such stickers. Aschalew Yirgalem is one of them.

Yirgalem told Anadolu Agency that the new prime minister had brought him good business and hopes of a decent job.

“I have been selling the stickers since he [Ahmed] became our prime minister. I also sell stickers of Christian saints,’’ he said. “Drivers plaster Abiy’s stickers alongside the saints.”

Inside the mini-bus taxi, a middle-aged man, says: “We don’t trust these soldiers, they could be mobilized against our Abiy by the enemies of change.’’

Now, the vehicle has turned into an open forum for political debate. No one is scared of voicing their opinion.

Yeshewas Assefa, chairman of opposition Semayawi party, says free speech has been an essential character of this government.

“The Ethiopian government was an authoritarian state which had stifled free expression and unlawfully imprisoned opposition politicians and journalists for more than a quarter of a century,” he said.

Ahmed released thousands of political prisoners, allowed the return of many exiled armed opposition groups, unlocked hundreds of websites and dozens of radio and television stations, among others, Assefa noted.

“Forgiveness, tolerance, respect for human rights, democratization and unity of Ethiopia, are the core elements of the reform agenda of Ahmed. This is why despite ideological differences the whole opposition supports the reform,” Assefa added.

Ahmed promised to reform the justice, security and prison institutions.

Reforming electoral laws aimed at conducting free and fair elections and partially privatizing state-owned mega companies which include the Ethiopian Airlines and telecommunication sector are on top of his agenda. Freedom of press, multi-party democracy, economic growth and social inclusion are also fundamental elements of his reform.

Merara Gudina, a veteran opposition politician and chairman of the Oromo Federalist Congress was one of the thousands of political prisoners freed by Ahmed’s administration.

Gudina, who also teaches political science at Addis Ababa University, told Anadolu Agency that Ahmed was a unifying leader who saved Ethiopia from becoming a failed state due to anti-government protests from 2014-17.

“Ahmed’s meteoric rise to the helm of his own ruling party, Ethiopian People’s Revolutionary Democratic Front (EPRDF) which relentlessly weakened Ethiopian opposition parties, civic and state institutions, represents a bold and timely reform to save Ethiopia from disintegration,’’ he said, adding that the reform had widened the political space.

“By all accounts Abiy has managed to be the only hugely popular leader in modern Ethiopian history. But if he fails to deliver on his promises, people will definitely turn against him,” he added.

‘God will protect him’

Despite the unprecedented changes, a spike in ethnic violence, lawlessness, simmering ethnic politics and disputes over internal boundaries between various ethnic groups has posed an existential threat against continuity of the reform, Gudina said.

“Moreover, the reform lacks a clear roadmap, institutions and to date there is no national dialogue between the government and opposition parties that could chart the way for sustaining the reform.

“The October army mutiny was an attempted coup, and a military takeover is a real and imminent danger,’’ he said.

Earlier in October, some 250 heavily armed contingent of a commando brigade entered the grounds of the National Palace and demanded Ahmed to talk to them.

The situation was peacefully resolved and Ahmed told members of the federal parliament that the intention of the soldiers was to abort the ongoing reform and to kill him.

Assefa, agrees with Gudina that the reform was facing serious challenges particularly from those who fear that the change could threaten their political and business interests.

“But a military coup could not happen,” Assefa said.

“Even if it happens, we have learned from Turkish people who stood behind their leader [president Recep Tayyip Erdogan], and aborted the July 15 coup attempt [in 2016].’’

The mini-bus grinds to a halt at Meskel Square in central Addis Ababa and the passengers draw conclusions from their debate.

Hitting the steering wheel of his taxi, the driver says: “To kill our beloved Prime Minister Abiy is to kill all of us and Ethiopia and there will be a bloodbath.’’

A young woman adds: “Abiy is a godsend. The Almighty will send his angels to protect him.”