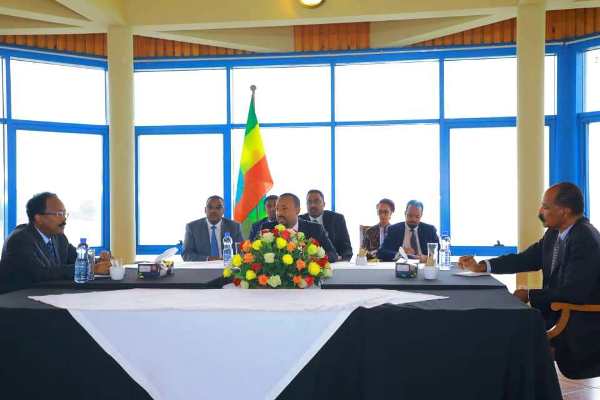 Ethiopian, Eritrean, and Somalia leaders welcomed the impending lifting of all sanctions against Eritrea.

Diplomats said last week that the United Nation Security Council is preparing to lift sanctions on Eritrea after the United States dropped its insistence on prolonging the measures.

Britain circulated a draft resolution to the council that calls for lifting the arms embargo and all travel bans, asset freezes and targeted sanctions on Eritrea, according to the text seen by AFP.

The council is to vote on the proposed resolution on November 14.

In a joint declaration issued at the end of the second tripartite meeting in Ethiopia, the three leaders said that the lifting of the sanction would contribute to enhancing peace, development, and cooperation in the region.

“The three sides stressed that this, their second meeting in as many months, highlights the historic transformation towards peace and integration in the Horn of Africa.

In their consultation, the three leaders reviewed developments and achievements since the signing in Asmara on the Joint Declaration on Friendship Comprehensive Cooperation between the three countries.

They noted with satisfaction the tangible and positive outcomes already registered and agreed to consolidate their mutual solidarity and support in addressing challenges that they face individually collectively.

They stressed the importance of respecting the sovereignty, territorial integrity, and political independence of Somalia as well as their firm support for the people and government of Somalia people and all its institutions.

They also commended them for the progress they are making towards peace and stability.

They also reaffirmed their commitment to an inclusive regional peace and cooperation.

The three leaders agreed to hold the next tripartite meeting in Mogadishu.