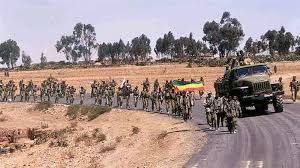 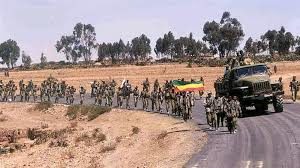 Asmara, Aug 16 – Ethiopia withdrew its troops from the border with Eritrea, as part of the process of normalization of relations between both countries which started two months ago, the media reported today.
According to the newspaper Haddas Ertra, the Ethiopian troops present in the border town of Badme were withdrawn -the epicenter of the territorial dispute that engulfed the countries in a war and the consequent rupture of ties.

Lieutenant-General Berhanu, Deputy Chief of Staff of the Ethiopian Defense Force, said that ‘moving the squads stationed in the border regions of Afar and Tigray is not a decision of the military, but of the government,’ according to the aforementioned newspaper.

According to media reports, Asmara made a similar move in mid-July.

The bilateral approach was initially fostered by Prime Minister Abiy Ahmed, who since his arrival in power in April expressed interest in signing a peace agreement with the neighboring state.

The Eritreans had already gained independence in 1993, although ties of another kind remained unchanged until 1998, when differences around the borders led to a large-scale military clash that lasted until 2000.

Although a non-aggression pact formally closed the confrontations 18 years ago, the sporadic skirmishes continued on the border and relations broke irremediably.