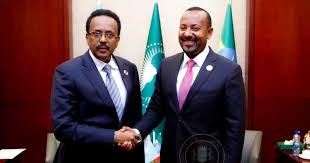 Somalia’s President Mohamed Abdullahi Farmajo and Ethiopia’s Prime Minister Abiy Ahmed are concerned over a possible of eavesdropping on their phone conversations.

Ethiopia’s leader Abiy Ahmed informed Somali President Mohamed Abdullahi Farmajo that their previous phone conversations had been monitored and possibly recorded after meeting at the sidelines of the African Union Summit in Addis Ababa.

Abiy Ahmed told Farmajo that a Gulf Arab country had been listening in on their phone talks for months before he became aware of the bugging, sources were quoted.

The sources added that Pegasus, a software developed by an Israeli cyber-arms company had been used for the eavesdropping, the first wire-tapping of its kind to target Horn of Africa regional officials, though authorities of both countries have not yet commented on the reports.

Last month, Somalia’s former Foreign Minister Mohamed Abdirizak said the government had refused an aid offer from Egypt due to fear of antagonizing Ethiopia, which has been in a heated dispute with Cairo over the construction of a mega dam on the Blue Niler River.