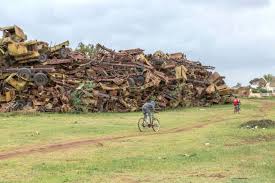 Crushed tanks and trucks destroyed in Eritrea’s war for independence from Ethiopia are piled up on the outskirts of Asmara, a rusting testament to a long and bloody history of conflict.

But the animosity symbolised by the tank graveyard is being swept away.

A new era of friendly relations has dawned between the countries, whose leaders declared a surprise end to two decades of conflict on July 9.

reporters who last week visited the notoriously hermetic country, which dismantled its private media in 2001 and rarely gives access to foreign journalists.

“At this time, especially the youth, they won’t accept (it).”

And for a generation of Eritreans whose lives have been shaped by their government’s fear of Ethiopian aggression, there is a glimmer of hope that the diplomatic frenzy may also lead to change at home.

Cafe society: Eritrea is one of the world’s most enclosed countries. Addis Ababa has undergone explosive development in recent years, but Asmara remains a quiet city

A quiet city of sidewalk cafés and picturesque villas, Eritrea’s Asmara was named a Unesco World Heritage Site last year for its colonial Italian modernist architecture, including a wing-shaped petrol station and an art-deco cinema that is currently showing the Tour de France.

But while Ethiopia has in recent years enjoyed an economic boom and explosion of construction, Asmara has slowly crumbled, with few signs of development.

“Asmara is now old. The asphalt is rough,” said an elderly resident gesturing at a cracked sidewalk.

Asked what peace will mean, he again pointed at the walkway and said: “It will be smooth!”

But the biggest question mark for many is whether there will be any change to a compulsory national service programme which includes a period of military training before recruits are funnelled into jobs ranging from hotel receptionist to government functionary.

The service time is meant to be 18 months but has been indefinite since the border war with Ethiopia, and recruits are forbidden from travelling without permission.

Eritrea says the scheme fosters national unity — but the United Nations has likened it to slavery and hundreds of thousands of Eritreans have fled their country, claiming they fear persecution or retribution linked to the programme.

About 10 of her friends and relatives have left “to avoid the poverty, and to find other family members,” she added.

“Maybe if everything changes, they’ll stop talking about getting to Europe.”

Biniam Tikue, 29, is completing his national service by teaching at an art school, and said many young people feel trapped in Eritrea.

“We can’t go to another country. If we want to show our art, we have to send it,” she said.

The government has defended the mandatory service and other repressive policies limiting free speech and political opposition as crucial for countering the perceived threat from Ethiopia.

“Everyone understands the situation with Ethiopia,” said Yared Yemane, 29, who is serving his national service as a football player.

“But maybe if we were at peace, nobody would want that, so maybe it would change.”

Eritrea was once a province of Ethiopia until Isaias led a decades-long rebellion that saw Asmara secede following a referendum in 1993.

The two countries were back at war five years later when a border dispute erupted into a two-year conflict that killed around 80,000 people.

A peace treaty ended the fighting, but Ethiopia ignored a 2002 UN border demarcation and occupied territory that had been awarded to Eritrea.

After the war deadlocked, Isaias jailed many perceived regime opponents and shut down independent newspapers.

In the face of what was presented as Ethiopian provocation, some Eritreans saw their government’s policies as necessary.

“We paid with a lot of our friends’ (lives), but it’s OK,” said David Gebremichael, a former fighter who lost four of his seven brothers in the independence war.

He now works for the ruling People’s Front for Democracy and Justice.

Abiy has promised to finally accept the UN border ruling, but neither side so far has mentioned a troop pullout. And Isaias has said little about potential changes at home.

But last week, these and other potential hurdles were far from people’s minds.

In hotels and restaurants, strangers greeted Ethiopian visitors who arrived on the resumed flight with cries of welcome.

“We are the same people!” some cried.