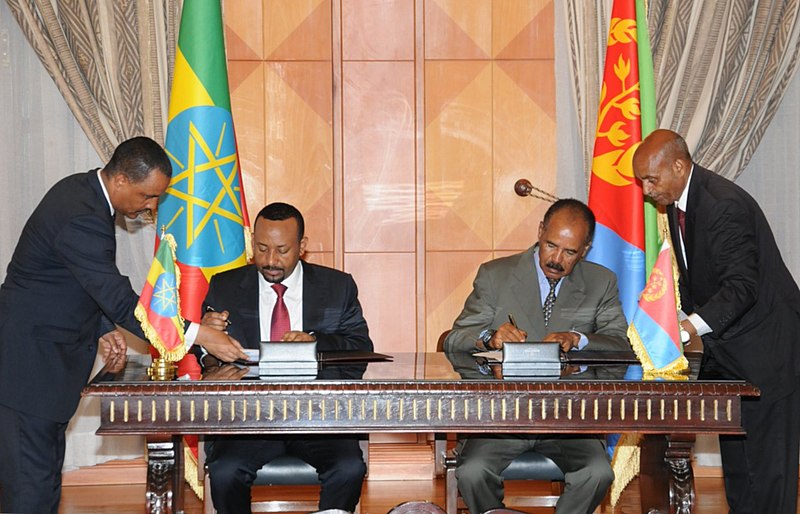 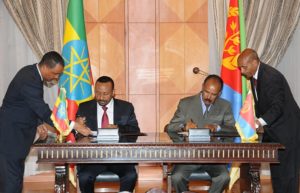 Despite the breathless headlines of the rapprochement between Ethiopia and Eritrea, nothing substantial has come out from Eritrea, as yet. Eritreans, who have been endlessly waiting to hear of any policy change from their government, are about to give up.

Since Eritrean officials never cared to give any real information on the agreement between the two countries, the only news is coming from Ethiopian media. Eritreans inside the country have had to watch Ethiopian TV channels to stay informed. The Eritrean diaspora is ceaselessly refreshing the Twitter handles of Ethiopian officials. The only time Eritrean leaders have communicated about the rapprochement was to inform residents to show up in public places to welcome state guests. While regular direct flights between the two countries have resumed, and normalization of inter-state relations progress at a swift pace, Eritreans are still held hostage and reduced to mere observes in their own affairs.

The first Ethiopian flight to Asmara carried many Ethiopian investors who came to explore the Eritrea’s business landscape. Eritreans are denied this privilege.  Since 2003 import and export businesses have been banned in Eritrea. The subsequent targeting of Eritrean nationals with capital under different pretexts, have resulted in Eritrean investors steadily fleeing the country. The extremely unfavorable conditions for businesses, coupled with a construction ban in May 2006, have pushed almost all Eritrean investors to relocate to South Sudan, Angola, Uganda and other African countries.

No matter if some would like to return, Eritrean investors are not part of the rapprochement. Such uneven engagement will eventually lead to resentment and a sense of alienation among Eritreans—a perfect recipe for tense relations between the two countries in the future. The opening of borders will certainly benefits Eritreans, however thanks to the Eritrean government’s lack of communication, many are unprepared to even host a few guests, let alone the potential flood of Ethiopians who have been waiting to visit Eritrea for decades.

Most hotels and restaurants do not have basic amenities, such as running water and other modest services, yet they are about to be packed with Ethiopian visitors.

As many outside observers are overwhelmed by the headlines on global news networks, they are still not able to explore the reality on the ground. The first Ethiopian Airlines flight to Eritrea carried many international and Ethiopian journalists. With their expectations low, many were cheerfully sharing their adventures on social media. However, references to Asara’s art-deco architectural style and the country’s welcoming culture have dominated in coverage by international media over the past few years. We are still waiting to see if the journalists will come up with deeper stories that delve beneath the cute art-deco surface.

For example, while thousands of followers of Pentecostal churches have been rotting in underground dungeons since 2002, it has been widely reported, even by the Eritrean opposition media outlets, that 400 prisoners of faith, particularly followers of the banned Pentecostal church have been released following the peace deal. This was lauded as a sign of an improving Eritrean police state. Yet, as later confirmed they were only 35 and their release has nothing to do with the recent developments. In an interview with BBC Tigrinya, Eritrean Minister of Information Yemane Gebremeskel, even said he was not aware of the release, and reiterated the old stand that the Eritrean government does not allow religions sponsored by outsiders.

Meanwhile, the information gap for reporting on the ground has been filled by rumors; some deliberately driven by the intelligence agencies and others by self-appointed wishful thinkers.

Rumors have been floating around that there will be a mass release of political prisoners and journalists who have been held in custody since 2001. It can’t be confirmed. Other rumors have created a media uproar, such as the widely spread news that claim Eritrean troops are withdrawing from borders. This news was based on a Facebook page run by two random individuals who are not affiliated with any official office. Pressed to reveal their sources and motives on Twitter, their response was, “the story was meant to be positive.” The same Facebook page had also announced that the most infamous military prison, Adi-Abieto, had also been closed due to the recent developments.

Reuters repeated similar unconfirmed news claiming that the time period for Eritrean national military service has been returned to its regular 18 months. The news story was based on information from family members whose children are in the military and cited President Afwerki’s recent speech in Sawa. In the speech, which I previously cited for its lack of content, the President did not discuss the subject. When the minister of information was asked to comment he neither denied nor confirmed it.

The consequences of such unverified news have already reverberated beyond the borders of the Eritrea. Israel is weighing the possibilities of fouling Eritrean asylum seekers.

President Afwerki has consolidated his unchecked rule by institutionalizing fear, and limiting information. Eritrean top government officials mainly depend on town rumors for information. As Haile “Durue” Woldensae, the former minister of foreign affairs (incarcerated  since September 2001) related, even in times of emergency “ministers did not have any information on what things were going on. So, they were going to anybody that could tell them what is happening, how are things going on.”

During all these recent developments, Afwerki is applying his usual style of information blocking. As some sources have indicated, it appears that many ministers did not have a clue about the rapprochement until the president made the announcement on June 20th that Eritrea would send a delegation to Ethiopia.

Apart from his subordinates, who have been effectively reduced to docility, the majority of Eritreans, particularly those living inside the country, are very much aware that Afwerki will only take actions if it secures his own interest. It has not taken long for the euphoria of rapprochement to turn to anger and frustration. Yet, some hoped that the peace deal might benefit Eritreans by way of securing Afwerki’s self-interest.

So what possible changes might we in fact expect in Eritrea? Among the highly expected actions would be the re-shuffling (or “cleaning”) of the top echelons of the government. Many also expect mass arrests of senior state officials. In exchange, Afwerki might release some political prisoners as a sign of change. He might go so far as to use Ethiopian forces to subjugate his own people, as he did in 2013 when he used the Tigray People’s Democratic Movement (TPDM) to conduct military roundups and arrests because Eritreans did not comply with his orders to arrest their brothers and sisters. He also may try exert some influence inside of Ethiopia.

All things are possible as long as Afwerki’s self-interests are assured.