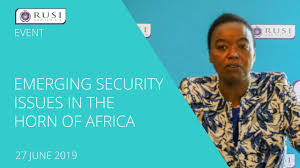 At this event, Ambassador Monica Juma, Cabinet Secretary for Foreign Affairs of the Republic of Kenya, spoke on emerging security issues in the Horn of Africa.

Ambassador (Dr) Monica Juma is the Cabinet Secretary, Ministry of Foreign Affairs of the Republic of Kenya. She spearheads the Foreign Service of Kenya in projecting, promoting, protecting and advancing the national interests of the Republic of Kenya in an increasingly dynamic and complex international arena. Before assuming this position on 16th February 2018, Dr Juma served as the Principal Secretary in the Ministry of Foreign Affairs (MFA) between January 2016 and February 2018.

Before joining the MFA, she served as the Principal Secretary in the Department of Interior, Ministry of Interior and Coordination of National Government for a period of 18 months. During her tenure in this portfolio, she led a team that drove reforms and transformation of the national security policy, architecture and operations within the National Administration, the Immigration and Registration of Persons departments, as well as the National Police Service. She also initiated work that led to the development of Kenya’s strategy on Counter Terrorism and Violent Extremism and the creation of a multi-agency approach in tackling security challenges.

Prior to serving in the Ministry of Interior, Dr Juma was the Principal Secretary in the Ministry of Defence. During her 15-month tenure, she was instrumental in strengthening the business process systems within the Ministry, clarifying its strategic orientation and bolstering the professional stature of the Kenya Defence Forces.

Before her appointment into the executive, Dr Juma served for three years as Ambassador Extra-Ordinary and Plenipotentiary of Kenya to Ethiopia and Djibouti, and Permanent Representative of Kenya to the African Union, the Inter-Governmental Authority on Development (IGAD) and United Nations Commission for Africa (UNECA), between June 2010 and July 2013.