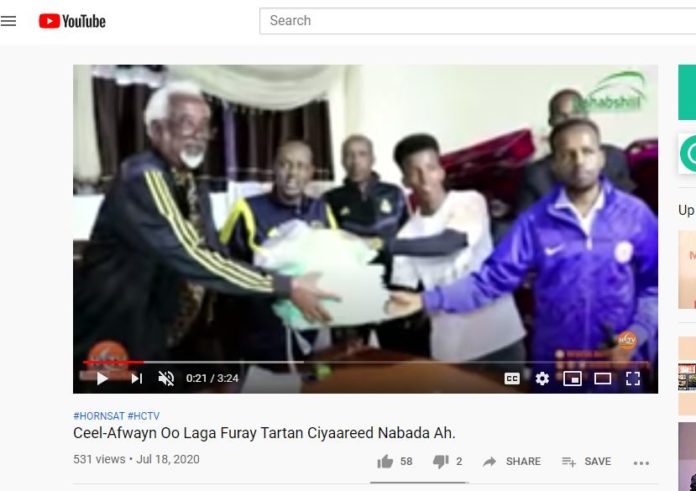 A milestone football tournament which was in the offing is now underway expected to kick-off any moment, starting from today Sunday 18th July, in El-afweyn.

Dubbed the El-afweyn Peace Trophy, the matches will feature six of the local area teams competing for the cup.

The culmination is an erstwhile pacification process that has had hatches of rivalry buried by the brotherly residents of the district.

Several members of present and past cabinet graced the occasion which saw the sporting facilities being handed over to the local mayor in a ceremony held yesterday the 17th of July 2020. The facilities comprised of sporting shorts and vests for the six teams, corresponding number of soccer balls, medals of various types and the ultimate trophy of the tournament, the Peace Cup.

The leaders present who gave words of wisdom comprised of the Interior, Livestock, Sports, and Constitutional affairs ministers and also the veteran political leader and peacemaker Ali Mohamed Waran’ade.

Noting that this is the second phase of games initiated for pacification purposes, the local mayor said that the tournament is a culmination of the unity and solidarity achieved by the residents of a place that has been a volatile area in the past years that witnessed several skirmishes.

It’s noteworthy to point out that the town has since witnessed the re-opening of the local market and solar energy-oriented street lights have been put in place.

This is after the government, local leaders and pacifying delegates from the rest of the republic had put in concerted and every effort to bring peace to the area.

The said leaders above have been in the area for the past couple of months to bring the brotherly clans together hence achieved a harmonious setting.