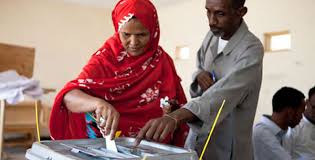 An inclusive democracy means that all citizens should feel represented and be heard. However, many political systems sometimes exclude women and minority from the decision-making platforms, while other countries elect women to be their head of states or head of governments. As of June 2020, 19 out of 193 countries have female head of states. Ethiopia is the only country in Africa that has a female Head of State.

On the global Parliaments, 25% of 39,202 of Lower House members of 190 countries were women . Rwanda has the highest number of women in parliament . 27 out of the 193 countries have less than 10% female representation in their Lower House
In Horn of Africa, Ethiopia, Djibouti and Somalia has more than 24% female representation in their parliament, while Somaliland has the lowest representation when it comes to the women’s political participation in both appointive positions and elected offices.
Quota systems and commitments from the leaders have increased that more women are elected in the parliaments of Ethiopia, Djibouti and Somalia. The three countries have adopted different quota systems and policies to empower women and increase their political participation.

In this comparative analysis report, CPA will assess how Somaliland Democracy is failing to represent the women.

2. COMPARATIVE ANALYSIS ABOUT ROLE OF WOMEN IN DECISION MAKING OF THE HORN OF AFRICAN COUNTRIES.

Ethiopia, the largest and the most diverse nation in the Horn, is the most populated country in the region with more than 110 Million People. Ethiopia is the leading role model of the women empowering in Horn, both the head of state of Ethiopia and the President of the supreme court are women. Ethiopia has the only Female President in Africa and what’s more, Ethiopia women secured 50% of the cabinet ministers.
Comparing to the other countries of the Horn, Ethiopian women obtained the most seats in parliament, 38% of the 547 members of the House of People’s Representatives are women, while 49 of the 153 members of the House of Federation are women. Also, women lead the secretariat of the House of the People’s Representatives.

Djibouti, one of the most strategic nations in the Horn, is the least populated comparing to the other countries, it has nearly 1 million people. But Djibouti is very famous for their diversity and service providing.

In 2003, was the first-time women elected in Djibouti Parliament, after the cabinet adopted a 10% quota for women one year earlier. After 17 years, Djibouti became another role model of the region for the women empowerment.

Women filled 26% of Djibouti’s 65 members of the National Assembly. Also, Women are very visible in the judiciary sector, for instance, they are leading the Court of Audit and the Court of Appeal and they were leading earlier the supreme court of Djibouti. On the executive branch, women lead three cabinet ministries out of the 21 ministries.

2.3 Somalia:
Since 1991, when Somali central government collapsed, there have been more than 14 peace conferences that international partners supported to have a functioning Somali government . The traditional leaders, armed groups and politicians were the leading participants who were deciding the output of those peace conferences. In 2012, for the first time since 1991, a Somali president has been chosen inside the country.
Somalia’s federal government failed to host direct elections, but its clan-based selection system seems to give women a more visible representation in the decision-making platforms. For example, the women lead four cabinet ministers out of the 26 ministries, while 67 out of the 275 members of the House of the People are women and 13 female members out of the 54 members of the Upper House. Not only that, but women lead different temporary registered political parties and the National Electoral Commission.

2.4 Somaliland:
Somaliland reclaimed its independence on May 1991. After 10 years of having clan-based selection system, finally the people of Somaliland conducted the referendum of the constitution on March 2001. For the last 18 years Somaliland was practicing the democratization system, and the people elected the House of Representatives, the president and the local councils.

Although women are nearly 50% of the voters, Somaliland’s Democratization system failed to empower women and to include the decision-making platforms. Compared to the other countries of the region, Somaliland has the lowest women representation. For Example, the Somaliland’s 82 members of the House of Representatives, women have only 1 member, while there is NO single female member in the House of Elders. On the Executive branch, women hold two cabinet ministers out of the 23 ministries. All three political parties are led by men.

2.5 COMPARING THE ROLE OF WOMEN REPRESENTATION IN FOUR COUNTRIES OF THE HORN OF AFRICA.

3.1 Ethiopia:
In 2004, the ruling party of Ethiopia, EPRDF proposed a voluntary 30% quota for women in parliament. meaning that at least 30 percent of the candidates running for office on a party’s ticket must be female. now Women filled 39 percent of the Lower House seats. Sahle-Work Zewde became the country’s first female president, while in 2018, the Prime Minister of Ethiopia nominated cabinet ministers that women secured 50% and Aisha Mohammed became the country’s first female defense minister, at that time the Speaker of the House of People’s Representatives was led by Muferihat Kamil Ahmed another woman.

According to the law, article 54(3) of the constitution requires that “Members of the House, on the basis of population and special representation of minority Nationalities and Peoples, shall not exceed 550; of these, minority Nationalities and Peoples shall have at least 20 seats. Particulars shall be determined by law.” So, this article did not mention only women but all minorities to have 20 seats. Also, article 35 of Ethiopian constitution states “The historical legacy of inequality and discrimination suffered by women in Ethiopia taken into account, women, in order to remedy this legacy, are entitled to affirmative measures. The purpose of such measures shall be to provide special attention to women so as to enable them to compete and participate on the basis of equality with men in political, social and economic life as well as in public and private institutions.”
The most important thing that needs to be underlined is, that Ethiopian leaders have willingness and commitment to empower women and get rid of any barriers to actively participate the decision-making table.

3.3 Somalia:
In February 2012, Somalia’s Federal President, Federal Member States and the International Partners reached an agreement of ending the transition period and completing the draft constitution. According to articles 3(2b, 2c) and 3(3e) of Garowe II agreement , required that women must make up 30% of the parliament by a way of set aside of the 4.5 clan-based power sharing. Now women filled 24% of the 275 members of the House of the People and 24% of the Upper House.
To ensure that women are represented in the parliament and prevent to lose any seats they have now, the Lower House approved a proposal suggesting that only women can contest the current female seats in the House.

3.4. Somaliland.
Somaliland, one of the best democracies in the region, has failed, both to approve a quota system or to have more women representation in the different levels of the government. The 18 years-old democratization process of Somaliland became a male dominated decision-making system. Not only the Executive branch, but all the levels of the government have limited women’s representation, including the political parties, parliament, and other sectors of the government.
For nearly two decades, Somaliland women and other Civil Society Organizations were advocating to have a quota system that can increase women’s political participation, unfortunately the male dominated political system failed to approve it.

4. Conclusion:
Somaliland President H.E. Muse Bihi Abdi got more votes than any of the other regional leaders , nearly 50% of the voters who casted their votes of all Somaliland elections were women. But Somaliland has the lowest women representation in the region. In Ethiopia, Djibouti and Somalia, women are the chairperson of a political parties, and are on the decision-making table. For example, in December 2019 , the eight political parties who founded the Prosperity Party of Ethiopia , women were leading two of them, and also, they hold the highest position of state including the Head of State, the President of Supreme Court, etc.

The CPA’s January 2020 report about women’s political participation shows that the President of Somaliland nominated 214 positions, only 6% of them were female, while all other 94% were male. In other words, Somaliland has 613 elected or presidential nominated offices, only 16 of them are women, while the remaining 597 are men. Nearly 323 elected local councilors, only 9 of them are female, while there is no single female mayor or governor in the country.

That above data indicates how women are marginalized in Somaliland decision making platforms despite their attempts to be part of the process.Women have been struggling their rights of political participation since the first election in 2002, and until now no major break-through is made so far. Reasons are many, however two major deterrence factors are the existence of clan-based election system and the dynamics of clan power sharing. Secondly, the Somali culture which believes that women cannot take up positions of leadership. The continued absence of women in the decision making would undermine inclusive governance and the fairness of participation by all concerned citizens.

5. Recommendation:
To the Government: CPA is:

About CPA:
The Center for Policy Analysis (CPA) think tank, was established in December 2014 to help the countries of Horn of Africa region to build peace, democracy, human rights, and effective governance systems where all citizens are equal. CPA which is the first think tank in Somaliland is working for the advancement of social, political and economic analysis as a fundamental approach to the understanding and explanation of social phenomena and as a necessary prerequisite for the decision-making processes through research, debates, conferences, dialogues, workshops, and trainings.