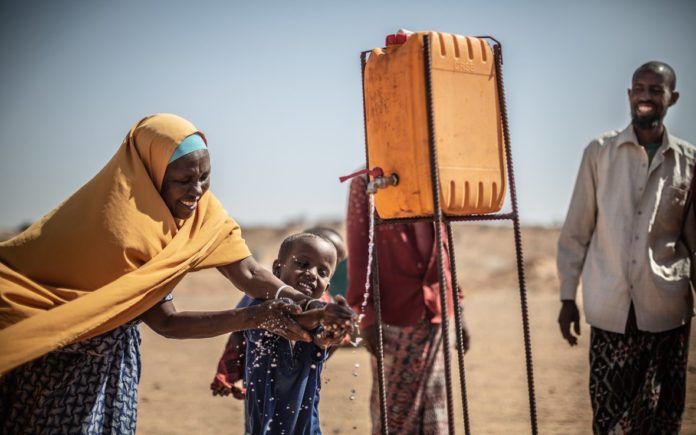 In Somaliland, Oxfam is helping displaced people with water and cash, but complacency threatens a greater disaster in the region.

“I don’t even have words to describe the impact. We lost all of our livestock. Thank Allah we didn’t lose people. Losing all our livestock devastated the community,” explains Jama, a father of 11 children and community volunteer in Oog village, in Somaliland.

He is describing the 2017 Horn of Africa drought that left a trail of destruction. Many pastoralist families, who rely on livestock for their living, barely survived, and as drought intensifies again in 2019, Oxfam believes the commitment evident in the timely, large-scale response in 2017 is giving way to complacency. And the current crisis is compounded as millions of people have been forced to flee their homes in the region due to conflict and the effects of drought.

This complacency comes at a time when communities’ vulnerability is particularly acute. More than 15 million people like Jama in Somali, Kenya, and Ethiopia are struggling to recover, as replacing livestock is no easy task.

Livestock central to life and culture

Livestock is the primary livelihood for many of the worst-affected communities, providing not just employment and food, but is also central to culture and life. Yet pastoralism in the arid Horn is especially vulnerable to climate-induced drought. It’s a simple equation: No rain equals no pasture and dead animals. No animals equals destitution.

“We lost everything. We have no other livelihoods here. … We are entirely dependent on livestock and don’t have alternatives. We survive by support from the government, NGOs, and relatives if they can support. We are very dependent, and there’s nothing we can do. Even if NGOs or government help, next year it will all happen again. … Nobody is providing enough support. Small-scale support isn’t enough,” laments Jama, who struggles to see a bright future:

“I’m pessimistic because if the current situation continues and drought reappears, it will just get worse. If there are no solutions and the situation doesn’t improve, we will lose everyone here. I’m afraid of losing people.”

Local and national authorities, aid agencies, and the donor community may be tiring of this seemingly never-ending humanitarian need, but this is the reality. Recovery from the 2017 drought is a constant struggle, leaving millions of people even more vulnerable to the 2019 drought. We sat on our hands in 2011 and famine was the result. There’s still time in 2019 to not just have an effective response, but ideally trigger better ways to comprehensively address underlying vulnerability in the Horn, where those with the least resources, lack influence in decisions, and access to services are suffering the most.

What Oxfam is doing

Lessons learned from the 2011 famine in this region, which killed more than 260,000 people, helped avert a famine in 2017. Aid organizations swiftly committed funds for an effective humanitarian response, but Oxfam is not seeing a similar commitment in 2019. Oxfam is urging countries to support the humanitarian effort in the Horn of Africa and help communities that have done the least to create the current climate crisis but are nonetheless facing its worst impact.

To help communities displaced by drought and losing their livestock, Oxfam and its partners are currently helping hundreds of thousands of people with life-saving support in Ethiopia, Kenya, and Somalia by providing clean water and rapid flexible cash assistance, matched with longer-term support to build stronger, more resilient communities. Much of the work is being done in collaboration with local organizations like the Horn of Africa Voluntary Youth Committee (HAVOYOCO) and Candlelight.

Clean water: Oxfam is helping communities in Somaliland access clean water by improving wells, trucking in water, and building solar-powered desalination plants in areas where the ground water is too salty for people and animals. “The salty water is bad and the clean water is much healthier,” says Fadxa Salaad, who says she and her family lost all their livestock and then traveled to Eilmidgan where a desalination plant is now delivering better water. “My gastric problems are better now. …” Oxfam is also piping well water to kiosks, to make it more accessible (cutting down on long walks to wells). To help others ensure water will not make them sick, Oxfam and our local partners are also distributing water filters to help families stay safe when treated water is not available.

Sanitation and hygiene: Oxfam and our partners are building latrines and handwashing stations, and promoting good hygiene to help reduce the threat of water-borne diseases. We are also distributing hygiene items including soap to help people keep clean.

Cash: Oxfam is providing cash grants to families as a major part of its humanitarian response in Somaliland. Cash is a flexible lifeline for families: They can spend it according to their specific needs. Amounts vary, as does the frequency of disbursement among the different projects.

“Oxfam and [Oxfam partner] Candlelight provided $143 to 50 households. Most of the money went to food and some to kids’ clothes. Our lives changed a lot,” says Nur Saleban Dama, in the Saanag region of Somaliland. “It was so sad leaving our livestock. The cash grant gave us hope to live.”

Oxfam helped reach more than 375,000 people with humanitarian assistance in the worst-affected areas in Somaliland in 2018. “We are face-to-face with this crisis every day, and scraping together all possible resources to ensure the best possible response,” says Halima Adan, Deputy Director with Oxfam partner organization Save Somali Women and Children. “This means maximizing direct funding to local humanitarians embedded in communities who are nearly always the first responders in any crisis.”

Abdiaziz Adani is Oxfam’s communications and media officer in Somalia.