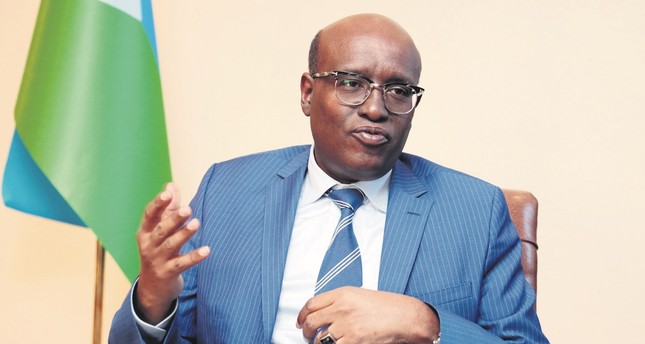 Djiboutian Ambassador to Ankara Aden H. Abdillahi noted Wednesday the developing bilateral ties in all fields in the context of Turkey’s opening policy to Africa, adding that Djibouti would welcome initiatives from Turkey to strengthen bilateral ties by implementing an economic zone.

“Our vision is providing room for Turkey in the region. We want to see Turkey as a strategic partner,” Abdillahi told Daily Sabah.

Djibouti has a geostrategic location near Bab el-Mandeb, an entryway to the Red Sea for ships from Asia and oil tankers from Arab Gulf countries heading to Europe, and is also one of the busiest shipping routes. The country hosts the largest permanent U.S. military base in Africa as well as military bases of France and China and Japan’s only foreign base.

As part of this Africa opening, Turkey has been boosting bilateral relations with Djibouti, which gained momentum after 2012 when the Djibouti Embassy in Turkey was established; the Turkish Embassy in Djibouti was inaugurated a year later. President Recep Tayyip Erdoğan visited Djibouti in January 2015, and his Djiboutian counterpart Ismail Omar Guelleh visited Turkey in December 2017. To further boost bilateral ties, Turkish Airlines has had direct flights between the two countries since 2012, while TİKA inaugurated an office in the country in 2012, carrying out numerous projects. So far, 60 protocols, memorandums of understanding and conventions have been signed in concerning areas such as energy, health and economy. Djibouti has allocated 5 million square meters to Turkey to establish special economic zones where feasibility studies by the Union of Chambers and Commodity Exchanges of Turkey (TOBB) and the Economic Policy Research Foundation of Turkey (TEPAV) are ongoing.

The ambassador added that he has been meeting with many major Turkish firms to increase investments, highlighting the activities of Turkish state-run institutions in Djibouti.

“The Turkish Coordination and Cooperation Agency (TİKA) will start constructing a hospital very soon. Also, we are cooperating with the Turkish State Hydraulic Works (DSİ) for the construction of a dam, which will be the first dam that they are supervising outside of Turkey’s borders. In addition, there is the construction of an Ottoman-style mosque, which is almost completed,” he said.

DSİ is building the Ambouli Friendship Dam for 17.5 million euros ($20 million) in the arid Red Sea coast nation in the Horn of Africa to prevent flooding and introduce vital agriculture. Also, a mosque built by Turkey’s Diyanet Foundation in Djibouti should be inaugurated very soon. Istanbul Technical University (ITU) provided technical support and helped create the curriculum as well as sharing experience in teaching foreign languages.

Abdillahi said that there are more than 500 Djiboutian students being educated in Turkey as the two countries have been working on more cooperation in education, adding that establishing a Turkish Maarif Foundation school and recently signed agreements between the two countries’ universities enhanced these ties.