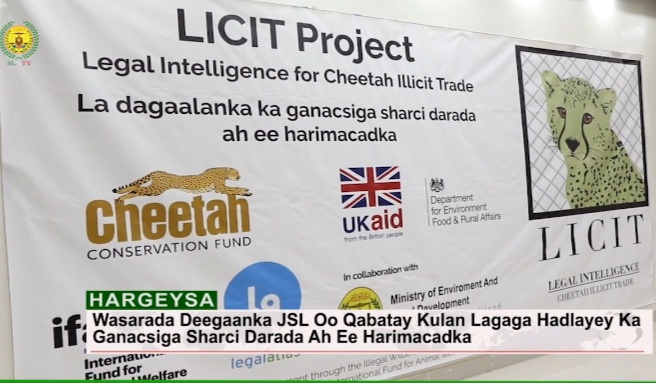 HARGEISA, Somaliland – 16 September 2021] Cheetah Conservation Fund (CCF) research indicates 300 cheetah cubs were poached from the landscape in the Horn of Africa each year between 2010 and 2020. In response, CCF has joined with International Fund for Animal Welfare (IFAW) and Legal Atlas to disrupt the poaching and trafficking of cheetahs between the Horn of Africa and Middle East-North Africa regions through a project known by its acronym, LICIT — Legal Intelligence/Cheetah Illicit Trade. From 19 to 23 September, IFAW, Legal Atlas and CCF will conduct a five-day training course in Hargeisa for representatives of the Somaliland government involved in law enforcement and the prosecution of wildlife crimes. With the ultimate aim of reducing poaching and illegal trade in cheetah cubs, the participants will increase their knowledge of Somaliland environmental and wildlife conservation laws, how to properly handle confiscated cubs, and how to carry out efficient criminal investigations involving wildlife.

Made possible by a grant from the UK Government through its Illegal Wildlife Trade Challenge Fund, LICIT seeks to build capacity with law enforcement agencies, strengthen legal frameworks and create regional networks between four legal jurisdictions – Ethiopia, Somaliland, Somalia and Yemen – identified by CCF as being the biggest stakeholders in this fight. As a source and transit country with almost 800 kilometres of coastline facing Yemen, Somaliland has long been at the centre of the illegal cheetah cub trade.

“The work we are undertaking with LICIT to improve our laws and establish a national unit to conduct counter-trafficking activities is a major step forward in our decade-long fight against illegal wildlife trade here in Somaliland,” said Minister Shukri H. Ismail of the Ministry of Environment and Rural Development (MoERD). “After the arrest of Cabdiraxmaan Yusuf Mahdi, better known as Abdi Xayawaan (Abdi Animals) in October 2020, we have not intercepted any illegal cub shipments in Somaliland. We hope this lull becomes permanent.”

With fewer than 7,500 cheetahs left in the wild, this level of poaching is devastating to biodiversity and threatens the species in the Horn of Africa with local extinction within 10 years.

“Supporting inter-regional collaboration in law enforcement is crucial to successfully counter wildlife trafficking,” said Matt Morley, Director of Wildlife Crime for IFAW. “We have been hosting Detecting Illegal Species Through Prevention Trainings (DISRUPT) across Africa and the Middle East for years, and with LICIT, we are sharing the programming we have developed through our work in these other jurisdictions.”

Legal Atlas Director James Wingard adds, “Consistent application of wildlife laws is one of LICIT’s goals. We have therefore compiled legal frameworks for each of the four jurisdictions. Doing so makes it easier to spot gaps in legislation. Then we can assist the respective governments in strengthening their laws by revising them or by creating new ones.”

The illegal trade in cheetahs is mainly driven by demand for exotic pets in the Middle East, but also by extreme poverty in source countries. Human-wildlife conflict makes coexistence with these predators difficult, and the impact of climate change on agriculture and livelihoods further exacerbates the situation.

“Even after we stop the illegal trade, our work in Somaliland and the Horn of Africa is just beginning,” said Dr Laurie Marker, Founder and Executive Director of CCF. “We are learning from confiscation events where wild cheetah populations may exist, and we are meeting the people who live with them. In these areas, the confluence of drought, famine, extreme poverty, lack of opportunity, lack of education, lack of awareness of the law, and conflict with farmers creates a complex web of issues that must be addressed to save the species. We are grateful for the LICIT project, which is enabling us to take giant strides forward in this fight.”