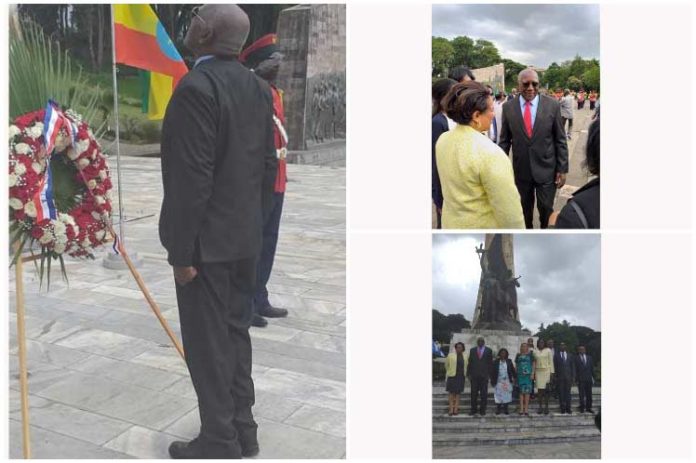 Valdes arrived in the capital last Wednesday for a three-day official visit and this Thursday, along with Cuba’s ambassador to the African Union, Angel Villa, he laid wreaths on tombstones with photographs of the heroes of the Internationalist Operation Baragua, in memory of the protest led by Cuban hero Antonio Maceo against Spanish colonialism in 1878.

The tribute ceremony was also extended to the Ethiopian martyrs who were killed in Ogaden, in the presence of Ethiopians trained in Cuban institutions and Cuban collaborators in the educational system.

The victory in Ogaden, on March 15, 1978, ended the invasion started in mid 1977 by Somali forces, whose president, Mohamed Siad Barre, wanted to seize the territory of Ethiopia and the rest of the so-called Horn of Africa, with the aim of forming a single state under his control.

At the end of the tribute, Valdes held a meeting in the embassy of his country with representatives of the movement of solidarity with Cuba, members of the Cuban community living in Ethiopia and members of the State Mission.

The official visit of the Cuban delegation to Ethiopia concludes tomorrow, the last point of a working journey that included the attendance at the swearing-in ceremony of Cyril Ramaphosa as president of South Africa, and the visit to Eswatini, invited by King Mswati III.