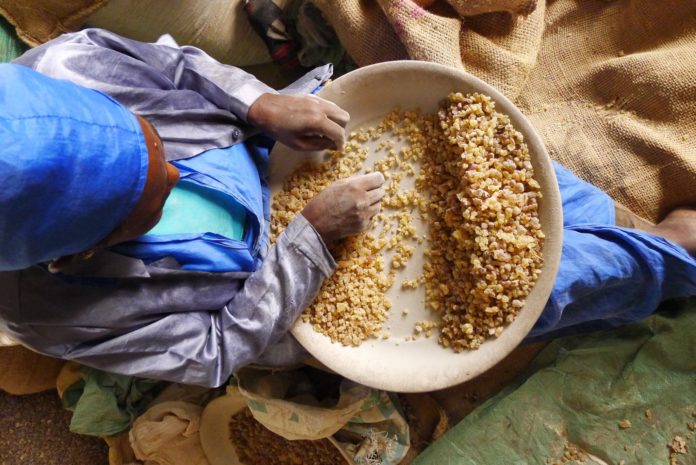 As more uses are found for the aromatic resin, the population of trees that produce it is on the brink of collapse.Frankincense grading in Adama, Ethiopia.

For thousands of years, cultures around the world have revered the sweet aroma of frankincense.

In Ancient Egypt, embalmers stuffed it inside the bodies and tombs of pharaohs and queens and its ashes were ground into eyeliner. Religious texts say rabbis burned it as offerings in Jerusalem’s temples, the three biblical Magi gifted it to the newborn Jesus Christ and the Prophet Muhammad prescribed it for fumigating houses and treating numerous ailments. It was also a staple in ancient Chinese medicine.

Today its smoke still permeates centers of worship and Ethiopian coffee ceremonies. Demand is also increasing in the West: It’s found in natural medicine stores, spiritual shops, bespoke boutiques and online. Sephora, the big chain beauty store, sells essential oil and expensive perfumes that contain it, like Chanel No. 5. Just down the block from a Sephora in Downtown Brooklyn, Tea Brown, co-owner of a traveling spiritual shop called Tea on Mars, sells bags of the gnarled, golden resin from Somalia. It’s so popular, she says, she has to restock it daily.

But her customers shouldn’t take its availability for granted: Frankincense may not be around much longer, warns a study published Monday in Nature Sustainability.

“The first time I said something about frankincense being under threat, there was panic,” said Frans Bongers, an ecologist at Wageningen University and Research in the Netherlands who led the study. “I got a lot of people asking me about it,” including Catholic clergy and top suppliers.

Frankincense, or olibanum, is an aromatic resin used in incense, perfumes and natural medicines. It comes from Boswellia, a genus of trees and shrubs endemic to the Horn of Africa, Arabian Peninsula and parts of India.

When frankincense tappers make gashes into some species of mature Boswellia’s woody skin, sap seeps out like blood from a wound. It dries into a scab of resin, which is harvested and sold raw, or turned into oil or incense.

Frankincense is exported by the thousands of tons each year. But as demand increases, over-exploitation and ecosystem degradation are bringing populations to the brink of collapse. The study’s authors estimate that without new trees to replace the old, half the intact forests — and half the frankincense they produce — will be gone within 20 years.

To find out its status, Dr. Bongers and colleagues surveyed Boswellia papyrifera — the species responsible for most of the world’s frankincense — in Eritrea, Ethiopia, Sudan and Darfur. The trees were old and dying, and most hadn’t produced a young tree in half a century. Models suggested that with no intervention, populations would collapse. Other Boswellia species face similar threats.

The problem, they found, was more people. They burn forests for agriculture and allow livestock that eat saplings to graze in forests. And increasing demand has incentivized poor tree tappers, who make only a tiny percentage of frankincense profit and rely on it for income, to take as much resin as they can in a short amount of time.

That leaves overtapped trees that are weak and vulnerable to pests and early death before a new generation can replace them. Despite adult trees producing plenty of seeds, researchers seldom found any new saplings, let alone newly matured trees. Others are too weak to produce enough quality seeds.

But it’s not hopeless, Dr. Bonger said. Populations can be restored by planting more trees, ceasing burning and building fences to block livestock. Sustainable tapping regulations should be created, taught and enforced, he added, and international trade limited. Buyers at all levels of the supply chain should emphasize quality and sustainable harvesting over quantity to reduce overtapping. And consumers can continue demanding sustainable, socially conscious products.

Anjanette DeCarlo, an environmentalist at the University of Vermont, who was not involved in the study, has worked with frankincense in Somaliland. She suggests empowering landowners and creating plantations to take pressure off forests. Plantations already exist in Oman, and in Somaliland, she has planted nurseries with trees that will soon be available for sponsorship. Saving these rare trees, she said, would also protect their endangered habitat.

This story was originally published at nytimes.com. Read it here.