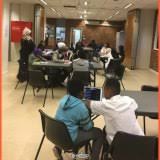 Two Somali girls are doing their absolute best at an Australian school, but are years behind their year 9 peers.

The girls become increasingly disheartened as they struggle with English, numeracy and basic computer skills. A concerned teacher tested the girls and found their cognitive development places them at the year 2 level.

All across Australia, children from refugee backgrounds are being placed into classrooms by age rather than ability.

Coming from war-torn or famine-stricken places, often forcefully displaced, their education is extremely limited. Be they from Syria, Afghanistan, Yemen or parts of Africa, these children are well behind.

They need special educational support on arrival to improve their language and academic level to the required grade. Many are failing due to the lack of support before they start at Australian schools.

The Coalition and Labor both support immigration on humanitarian grounds. The Liberal-Nationals set a figure of 18,750 a year; the ALP proposed an increase to 27,000.

But apart from budgeting some funding for settlement issues, that’s where the Commonwealth government’s contribution often ends.

It is the states and territories that provide government education for these children.

Too often schools just don’t have the resources to cope with these young people of refugee background. They are put in the “too-hard” basket.

When children – particularly those of refugee background – fall through the education system’s cracks, the blame game begins.

This has always been a problem, but is now more acute.

And the blame, in the eyes of some Australians, falls on new settlers and even the young people themselves.

Students who are way behind their classmates become looked down on, teased and even bullied. They become more isolated.

With young people of refugee backgrounds, the situation is exacerbated. They become more disadvantaged and more disengaged. Their lack of education means they can’t get jobs. They might turn to antisocial behaviour – even crime.

The African Australian community thanks Australian governments of various persuasions for allowing us to come to a country of mostly peace, tolerance and generosity.

We know that funding for education is limited. But there can be no greater need than that of a welcoming school environment for young people who come from different cultural backgrounds and often with fraught and violent histories.

We need more focus on and funding for the education of our young people, particularly those vulnerable of being pushed to the margins where they are liable to break society’s rules.

They are leaving school early because “the system” does not have the resources and the skills required to deal with young people who aren’t mainstream. Their cultural background is barely touched by Australian education.

The Morrison government must commit federal funding and resources to schooling for these disadvantaged young people.

They must make firm, targeted, watertight agreements with state and territory governments to spend funding where it is needed – providing an education that we can be proud of for all our citizens.