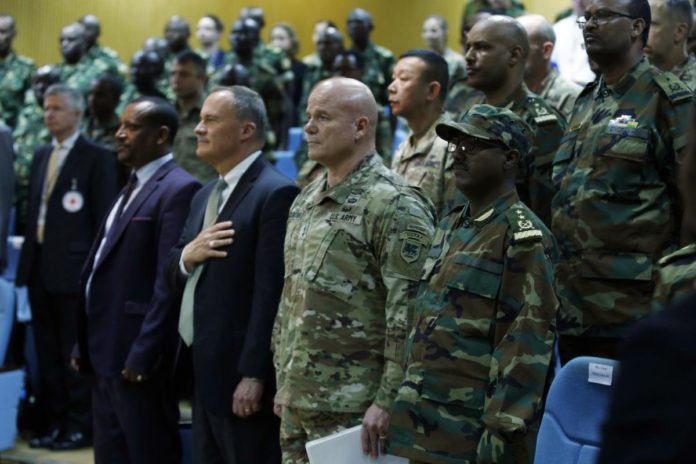 The two-week exercise will be financed by US while Ethiopia provides venues and platforms for the drills. The contributing countries to the African Union Mission in Somalia (AMISOM) – Ethiopia, Somalia, Djibouti, Rwanda, and Uganda – are to be the focal participants.

US Army Africa Commanding General Roger L. Cloutier said at the launch of the exercise: “The drills mainly focus on enhancing the peacekeeping capabilities of AMISOM.”

“The exercise will be a venue for command post, brigade-level military, and field medical trainings,” he said, adding: “Ethiopian and American forces will also hold joint drills in eastern Ethiopia.”

According to Brigadier General Habtamu Tilahun, deputy head of Peacekeeping Operations of the Ethiopian National Defense Force, the exercise would improve the peacekeeping capabilities, as well as “enhance the fighting prowess of AMISOM.”The drills also involved international organizations such as the UN and African Union, among others.

Officers from France, Germany, Italy, Netherlands, the UK, Canada, and Brazil are also participating in the exercises.AMISOM has been fighting the Somali militant group Al-Shabab since 2007.