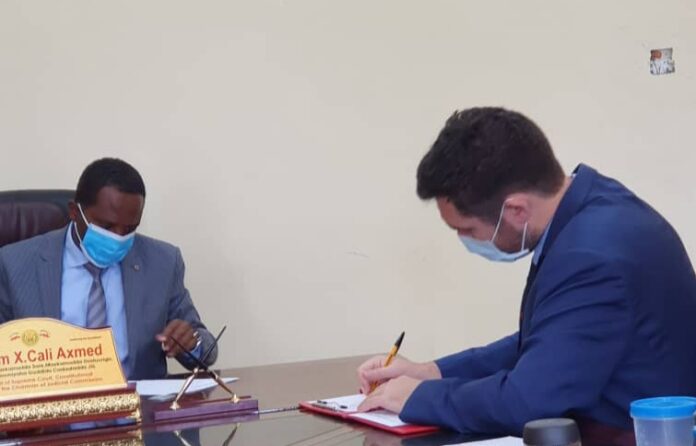 The Chief Justice Honorable Adam Haji Ali, met at his office yesterday with the Head of a Mission to Somaliland by the UK, Mr. Stuart Brown, who made a courtesy call on the Supreme court. During the meeting, the two sides discussed means of boosting ties between Somaliland and the UK as well as further enhancing the friendly relationship. Somaliland Chief Justice had also discussed with Mr. Brown ways to further boost and at the same time continue aid that the UK earmarked to Somaliland in general and in particular the judiciary sector. Mr. Adam reaffirmed that Somaliland is committed to upgrade its judiciary sector which is run by the meager revenue that it is generated from the sector. He reiterated that Somaliland is entitled to receive the funds that the UK has allocated to Somaliland. He congratulated on the UK for the aid that the judiciary receives plus agencies that maintain the rule of law. He also expressed thanks to the UK for funding the servers which are used to manage court cases in Hargeisa. The UK officially handed over the servers to the Supreme court yesterday. A pilot project was done to the use the servers to manage cases at Hargeisa courts. The plan is that it would be made available to the courts in nationwide to employ servers to manage cases. The Chief Justice briefed Mr. Stuart on the election and other issues that the Supreme court is involved. Mr. Stuart thanked for superb cooperation of the judiciary sector and the way that reforming the justice sector is going on very smoothly. The Head of Mission to Somaliland by the UK officially handed over the servers that it donated to Somaliland. He further promised to continue that UK aid to Somaliland judiciary The meeting ended in mutual understanding between the two sides.