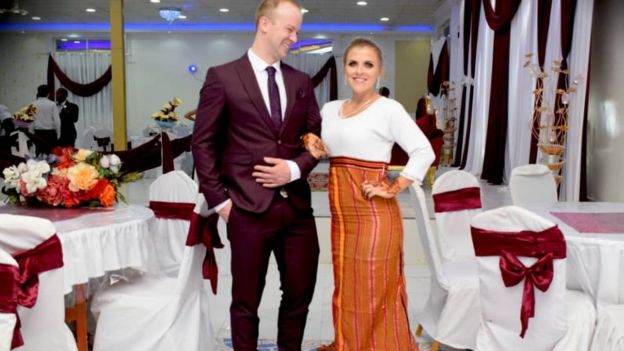 HARGEISA–Canadian couple held their wedding ceremony right here in Hargeisa, Somaliland capital. The bride wore the traditional Somali gown. A reporter visited the couple and asked them why they decided to hold their marriage ceremony in Somaliland and the reason for wearing the traditional Somali dress. The bride said that she was engaged with her fiance for four years where she lived in Hargeisa for two years of her engagement. She told the BBC Somali reporter that she was happy with the hospitality and friendship of Somaliland citizens in Hargeisa. She also told that her friends in Somaliland could not come to Canada in order to attend the wedding ceremony. She also plans to hold another wedding back home Canada. The bride said that the Somali dress is pretty one and that is why she has decided to have the Somali dress on her wedding day. Once she attended the wedding ceremonies where she was invited to attend here in Somaliland and that is why she decided to have the Somali dress on. She added that she loves the attractive Somali gown.