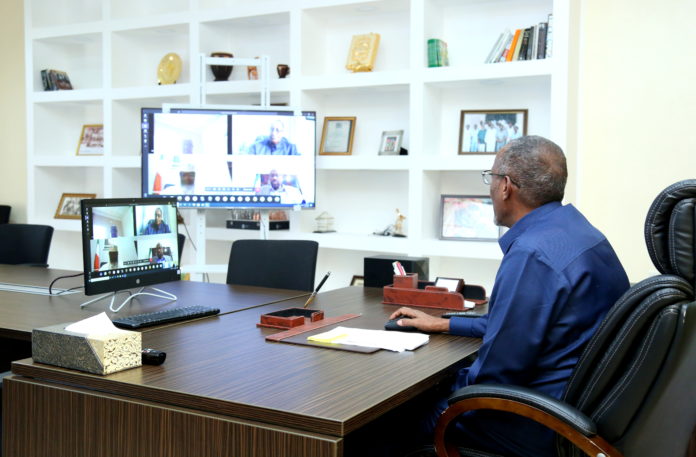 The council of cabinet ministers has gone hi-tech as they deliberate their weekly meeting under the chairmanship of the Head of the State.

This week the President H.E. Musa Bihi Abdi chaired the cabinet meeting through tele-conference videos as the council pondered over the Covid 19 pandemic.

The Health Minister Hon. Omer Abdi Abdillahi revealed that the state had set a coronavirus control station at each of the regions of the country with skilled staff manning them. The health minister pointed out that public safety is the number one priority.

While speaking at the cabinet meeting via video conference Hon. Omar noted that the health department had conducted tests on people suspected to have COVID-19.

He has said that apart from the confirmed 5 cases that were already announced, test results for other cases have not yet been received.

He said that the results of the blood samples taken from two other people suspected of contracting COVID-19 will be announced once the results are out.

The Vice President H.E. Abdirahman Sayli’i as the chair of the committee tasked against the prevention of COVID-19 said that they were on stand-by and were working round the clock in the battle against the spread of COVID-19.

However Hon. Sa’ad Ali Shire has painted a bleak future on the national economy. The finance minister was fearful that the impact of the pandemic will reflect negatively on the general economy hence the 2020 budget will not be as planned. He urged ministers and government department to streamline their expenditures further.

He pledged that the government is expected to have a national plan pertaining to the economic impact of COVID-19 could have on the populace.

The ministers have agreed upon to step up raising awareness on the deadly COVID-19 to the public. The cabinet called on the public to abide by the directives and guidelines issued by the Committee.