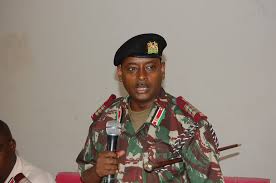 Public services, Vehicles, plane routes mapped out as terror zones will not be allowed t travel without police escort.

The declaration was made by the regional commissioner Mohamed on Saturday in Garissa barely a week after 11 passengers were killed by Al-Shabab militants aboard Madina bus en route to Madera from Nairobi.

He similarly ordered all security units to enforce the declaration.

Despite several such directives in the past, bus mangers have complained of harassment, frustration and extortion by the escort who demanded the buses at their commands.

7 police officers returning from leave were among the 11 people killed on Friday evening  by the contingent of Al Shabab militant. The bus was heading to Mandera.