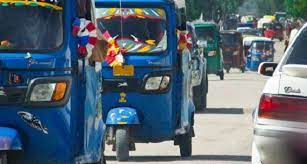 SL provincial police officers have declared a temporary basis ban on three-wheeled Bajaj drivers from operating in the evening across the region.

The regional security authority said that a security operation launched in Togder in the past hours to confiscate Bajajs.

Mohmed Farah Nur, the provincial police chief, has revealed what is behind the swift decision and said that one of the drivers of three-wheeled bajaj is linked to a hit and run accident that left a male pedestrian dead who is now kept in the hospital mortuary.

He said: ” according to our preliminary investigation reports, it indicated a bajaj with a red in color was linked to a hit and run accident that left a male pedestrian dead who is now in the mortuary. We decided all Bajaj with red color to be our prime target to arrest the suspect who killed the pedestrian.”

The regional police officers have announced that all three-wheeled bajaj will not be permitted to operate in the evening on temporary basis until further notice.

The measure put in place by the security in Togder is most hard one that drivers of three-wheeled bajaj are to face.