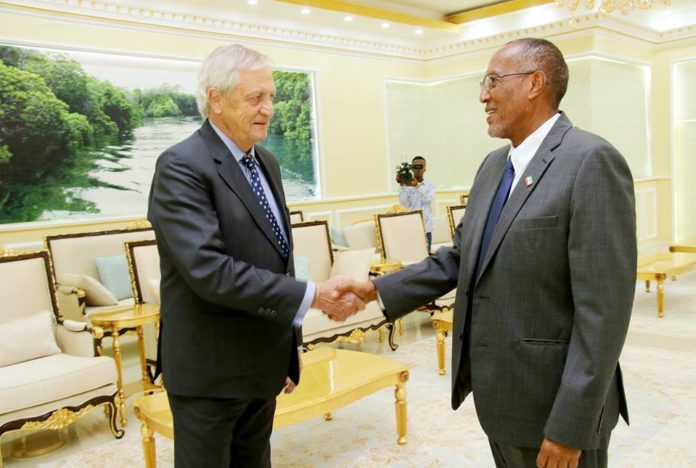 For weeks the UN of Secretary General Antonio Guterres has refused to answer Press questions about Somalia. Now Guterres’ representative Nicholas Haysom is being ordered to cease operations in, and presumably leave, Somalia. Soon thereafter Somaliland’s government issued a statement that “Somalia’s decision to expel UN Rep doesn’t concern Somaliland;” its Upper House has invited Haysom to relocate there. Guterres was on a junket location UNdisclosed for more than ten days; on January 2 there is nothing on his public schedule. And he has still said nothing, including on this: Somalia’s foreign ministry is notifying United Nations Secretary General that Mr Nicholas Haysom is banned and cease all operations within the country. This decision comes after Mr Haysom deliberately and intentionally interfered in state affairs.” And, typically, from the UN of Guterres, nothing.

This remained the case even many hours later when Guterres robo-issued a statement about what Haysom had called an indirect attack on the UN compound: “The Secretary-General strongly condemns today’s attacks against the United Nations compound in Mogadishu. He wishes a speedy recovery to the injured colleagues.

The Secretary-General recalls that intentionally directing armed attacks against United Nations personnel may constitute a violation of international humanitarian law. He urges the Somali authorities to investigate the attacks and swiftly bring those responsible to justice. The Secretary-General reaffirms that such acts will not diminish the strong resolve of the United Nations to continue supporting the people and Government of Somalia in their efforts to build peace and stability in the country.”

Guterres, whose spokespeople have declined 10 days of questions as to where the UNSG is and how much it costs, refuses Inner City Press’ questions about why it is not a conflict of interest to refuse to audit CEFC when in 2018 it tried to buy Partex Oil & Gas from the Gulbenkian Foundation of which Guterres has been a paid board member… The UN supports and funds AMISOM in Somalia but rarely answers when AMISOM kills people. But this time AMISOM has stepped in it, and the UN should be required to answer the Press, even as corrupt Secretary General bans it for the 166nd day. Our correspondents told us: “the Ethiopian contingent under AMISOM abducted Mukhtar Robow Ali, former Al Shabab number 2 and candidate to Southwest state of Somalia.

The amisom handed over to Somalia federal government who was not happy to his candidacy. As result people took to the street and at least 10 people was killed by Ethiopian/Amisom. Amisom works under U.N. Peacekeeping framework (outsourced project) and is funded by EU and US. Somalia police participated the killing is under the payroll of UNDP. Hours past still no words from UN bosses [because they are corrupt]. The city is preparing to more riot and conflict. Robow is no longer under U.N. or International sanctions and recently met the U.N. envoy however the government of Somalia is exploiting the weaknesses of Amisom through corruption to the highest officials.

Dozen Somali federal MPs accused the Amisom envoy as taking sides and may have benefited financially from the government.” On December 14 banned Inner City Press in writing asked the UN, before a noon briefing it was banned from and in which no one allowed in asked any question about anything in Africa, much less Somalia, asked “December 14-3: On Somalia, what is the SG’s comment and action on the deadly violence triggered by the arrest of Mukhtar Robow while seeking the presidency of South West state in next week’s election? Separately, what role including logistical support did the UN play?” At 2:40 pm deputy UN Spokesman Farhan Haq responded, “Regarding question December 14-3, we can say the following: Together with international partners, we underscore the importance of respecting the electoral process and the rule of law. We do not endorse or reject individual candidates.

We are concerned about developments in South West State. We deplore all violence and any other acts that could exacerbate the humanitarian situation.

We underscore our support for the agreed framework governing the elections, and urge all parties to respect the integrity of the electoral process. We encourage constructive dialogue to resolve political differences in order to advance the political and economic progress of the country.” But after more questions arose, including resignations, on December 17 before Guterres’ lead spokesman Stephane Dujarric held a briefing he banned Inner City Press for, Inner City Press asked Guterres and him in writing, “December 17-1: On Somalia, what is the SG’s comment and action now that Somali authorities say Mukhtar Robow has been disqualified from contesting in this week’s regional elections? Also, what is the UN’s knowledge of any role by UN supported AMISOM and/or Ethiopian troops in the arrest of Mukhtar Robow?” And more then five hours later at close of business, no answer by Dujarric to this or any other Press question asked. Totally corrupt. Uganda was recently shown in the US v Patrick Ho trial to be soliciting bribes at the UN, at least its foreign minister Sam Kutesa, soliciting a $500,000 “campaign contribution” to the President. We’ll have more on this.

In November the UN Secretariat merely passed the buck through its spokesmen when banned Inner City Press asked about “peacekeepers” from Burundi supported by the UN killed at least four civilians in Somalia. Here was the second question, from Inner City Press which after covering the UN from inside for 10 years has been banned by SG Antonio Guterres for 132 days and counting: “November 12-3: On the Burundian troops shooting civilians in Somalia, while all your office answered was to look at AMISOM’s press release, Inner City Press’ question is how this is impact the UN continuing to take/pay Burundi soldiers as UN Peacekeepers, or if at a minimum those involved in the Somalia reprisals will be barred from UN “service,” given that “Burundian troops serving under the African Union Mission in Somalia (Amisom) are alleged to have opened fire on four civilians on Tuesday after their convoy was targeted by a roadside bomb. Three of the men died at the scene, while the fourth died later in hospital.

Witnesses interviewed by Amnesty International reported that the troops drove over an improvised explosive device that detonated as they travelled through a district in the north of Mogadishu. In response, the troops are alleged to have exited their vehicles and “arbitrarily shot” the four men, who were named as Ali Shire Ugas, Hassan Yusuf Siyad, Qasim Dahir Khayre and Ahmed Mohamud Basey. Three of the men were lorry drivers, while Basey was a tuk-tuk driver.” To this, on November 13, the UN answered: “On question Nov. 12-3, we are aware that AMISOM is conducting an investigation into the incident. UNSOM has shared relevant information with AMISOM as it proceeds with its investigation.” What information? Why keep deploying these troops? Back on “November 7-4: On Somalia (and Burundi) what is the SG’s comment and action on that “African Union soldiers in Somalia have been accused of killing four civilians in the capital, Mogadishu. Witnesses say the soldiers opened fire on locals when their convoy was hit by a roadside bomb. The incident happened in the Huriwa district in the north of the city.On its Twitter account, the African Union mission said its convoy had come across explosions but made no mention of the shooting, alleged to have involved Burundian troops”? Hours later, the UN told Inner City Press only that AMISOM had a statement. But that wasn’t the question – it was passing the buck regarding killings by force the UN Secretariat supports. Here is today’s UN Security Council statement: “The members of the Security Council condemned in the strongest possible terms the terrorist attacks of 9 November 2018, which killed and injured innocent Somalis.