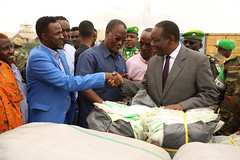 Ambassador Francisco Madeira, the Special Representative of the Chairperson of the AU Commission (SRCC) for Somalia, handed over the items in Jowhar, the administrative capital of HirShabelle State.

Ahmed Meyre Makaran, the Governor of Middle Shabelle region and Yasin Ahmed Mohamud, the HirShabelle State Minister of  Public Works, received the items on behalf of the Government, to be distributed to the community.

The items which include plastic sheets, mosquito nets, and blankets will benefit at least 9,120 people living in three IDP camps in the areas of Towfiq, Jiliyale, and Tawakal.

“What we are handing over to the authorities is a clear recognition that people deserve more.  We give what we can and hope that it will help you,” said Ambassador Madeira.

Ahmed Mayre Makaran, the Governor of Middle Shabelle region welcomed the humanitarian assistance and said it would help to meet some of the needs of the displaced communities.

The HirShabelle State Minister of Public Works, Yasin Ahmed Mohamud who also attended the ceremony, commended the cordial working relationship between his ministry and AMISOM.

“I want to thank AMISOM for the support extended to HirShabelle State and hope that AMISOM humanitarian unit will continue to work with us to address the needs of the people,” said Minister Yasin. 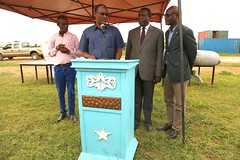 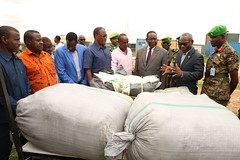 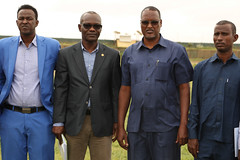