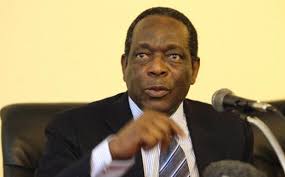 Mogadishu, 22 May 2020—The Head of the African Union Mission for Somalia (AMISOM), Ambassador Francisco Madeira, on Thursday reported on the progress Somalia has made in economic recovery, inclusive politics, and security through containing terrorism, dialogue and reconciliation, state building, reconstruction and recovery.

However, Ambassador Madeira told the security council that some of the progress is now being hampered by adverse conditions brought about by a combination of terrorism, recurrent natural disasters and the impact of COVID-19.

“Already, there are indications that remittances are declining, trade is dropping, and household incomes are facing a downward trend. A potentially more worrying concern is, if the trend of decreasing revenues continues due to COVID-19, there is a risk the Federal Government will struggle to meet some of its obligations.

“As partners of Somalia in our common endeavour to help the country remain on its feet and progress, we need to envisage ways of helping Somalia overcome these trends and meet the conditions required to be eligible for full debt cancellation,” Ambassador Madeira said.

In the area of inclusive politics, Ambassador Madeira said there have been encouraging signs of progress on reconciliation and dialogue processes at the state and local levels, and a degree of readiness by the Federal Government and Federal Member States to move forward on key national issues.

“In Galmudug, the deployment of AMISOM troops in Dhusamareeb has contributed to the creation of a conducive environment for the holding of a successful all-clan reconciliation conference, and to a substantial advancement of the state formation process. The process saw elections take place in February, and more recently, we witnessed the formation of an all-inclusive Galmudug cabinet and a peaceful transfer of power from former President Haaf to the incumbent, President Qoor Qoor. We welcomed these significant developments and, building on these important steps, we are optimistic about the future of Galmudug.”

Along with the above, the UN Security Council was informed that preparations for national elections slated for later this year have continued, despite Covid-19 disruptions.

“It is abundantly clear that holding national elections is a top priority for Somalia. I am also convinced, from my engagement with key election stakeholders, that they too view this as a matter of necessity and urgency,” Madeira said.

However, he called upon the federal government and its relevant bodies to ensure that all outstanding and potentially contentious issues are immediately addressed. These issues include making the electoral law implementable, particularly ensuring a thirty per cent quota for women’s representation and the adoption by parliament of the Amendments to the Political Parties Law.

“But above all, Somalia’s election will require the political support and involvement of all Federal Member States. There is urgency in this happening as time is running out. I therefore call on all stakeholders at the Federal and regional levels to overcome their challenges and allow free and effective presence and action of the National Independent Electoral Commission in all the federal member states so that credible, free and fair elections can take place.”

Ambassador Madeira also highlighted recent AMISOM security gains that degraded and disrupted Al-Shabaab’s operational capabilities across Somalia, including the March 16 Operation BADBAADO that dislodged the terrorists from the bridge town of Janaale in Lower Shabelle.

“The recovery of Janaale represents a serious blow to the Al-Shabaab, as the town was a strategic stronghold for the group’s operations in Lower Shabelle and Mogadishu,” He said.

Janaale was also a hub for manufacturing VBIEDs and IEDs. Beyond Janale, targeted operations by AMISOM and Somali security forces in Bula Xaaji on 20th March destroyed enemy positions and considerably reduced the group’s capabilities.

Madeira said the recent successes in Lower Shabelle were possible because of the generation of a professional Somali national force that relieved AMISOM forces to other areas where they created mobile units that have made a difference.

To this effect, he stressed the need for more support by the United Nations and other international partners to ensure rapid and consistent force generation so that Somalia will have an able national force that can take over from AMISOM come 2021, in line with the Somalia Transition Plan.

However, Ambassador Madeira warned that if the process of generating sufficient, well trained, well equipped and regularly paid Somali security forces does not speed up, the country may not, by the end of 2021, be able to achieve the goal of producing a critical mass of Somali forces capable of taking over from AMISOM, hold and preserve the gains accumulated over the years.