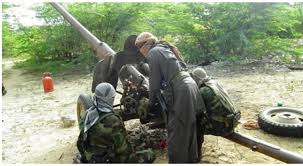 The mortar shells were launched from unknown location fell indoors of the base on Sunday afternoon where thousands of AU, UN, US and other multi national troops are stationed along with foreign diplomat missions.

AMisom and the SFG have not so far commented on the details of the raid, but two weeks ago, akin mortar attack prompted the immediate sacking of Wadajir district police boss for failing to prevent mortars fired from the district which landed at Halane base camp.

Casualties are not known as far as the attack is concerned. Al Shabab claimed responsibility for the raid, saying it inflicted heavy losses on foreign troops based in Halane camp.