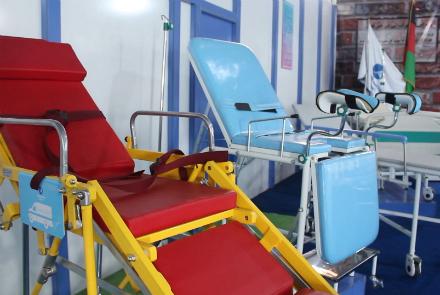 Officials said that another cargo of Afghan goods will be sent to Somalia within the next few days.

Afghanistan has exported different types of medical equipment and hygiene products to Somalia for the first time as officials say the local firms’ capacity has increased.

One container of the first shipment of Afghan goods, carrying 25 types of medical equipment in three containers, has arrived in Somalia through Iran and Turkey, head of Herat Chamber of Industries and Mines, Hamidullah Khadim, said.

He said that another cargo of 40 tons of Afghan goods will be exported to Somalia and other African nations within the next few days.

The goods are the product of Asia Pharma company in Herat.

“For the first time, at least three containers of goods which weigh 30 tons, and 25 types of medical equipment by Asia Pharma. This was the first cargo which we sent it to Somalia,” an Asia Pharma official Mohammad Amin Jami said.

“One truck has already arrived in Somalia. Two others have passed Turkey and four trailers are loading in Herat to travel to Somalia,” said Hamidullah Khadim, head of Herat Chamber of Industries and Mines.

Khadim said that four medical device companies are operating in Herat and that six other firms will be established in the near future.