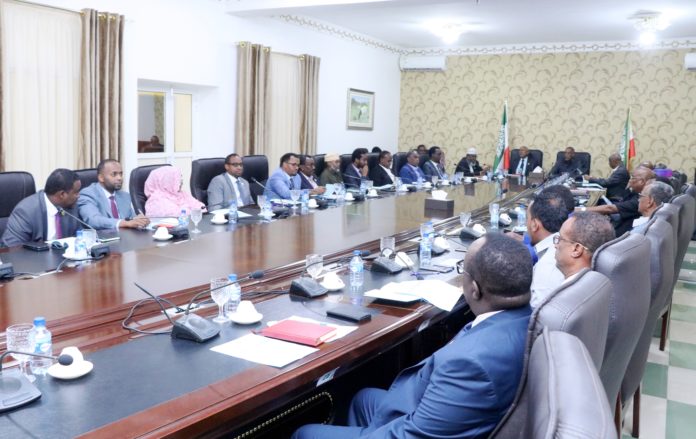 The Council of Somaliland ministers condemned with the strongest possible terms the relentlessness attacks against Somaliland progress and this is a true sign that the Somalian Federal Gov in Mogadushu has a deep seated hatred for the populace of Somaliland.

This was disclosed in the council of ministers meeting on Monday which transpired at the presidency while the Head of State of Somaliland, Musa Bihi Abdi chaired and which saw the attendance of deputy president, Abdirahman Sayli’i.

The last incident occurred when a vessel carrying an estimated 20, 000 goats and sheep from Berbera was refused to be unloaded by Saudi authorities citing that the vessel did not have a medical certification issued by the frail installed gov in Mogadishu.

The vessel was stranded and thanks to the efforts of Somaliland diaspora community in Saudi Arabai have secured the vessel to dock and be unloaded safely at Jiddah Port.

The press statement stated that Mogadishu has made clear to Somaliland over the animosity that they have for Somaliland people.

It is said that Mogadishu has claimed securing the unloading of livestock from the vessel.

The gov of Somaliland thanked to the gov of Saudi Arabia by taking the bold decision to allow the livestock to be unloaded from the ship.

The press statement further said that Saudi authority recognized the importance of the trade movement between Somaliland and Saudi Arabia.

The Somaliland gov is committed to seek another market since livestock is the mainstay of Somaliland economy.