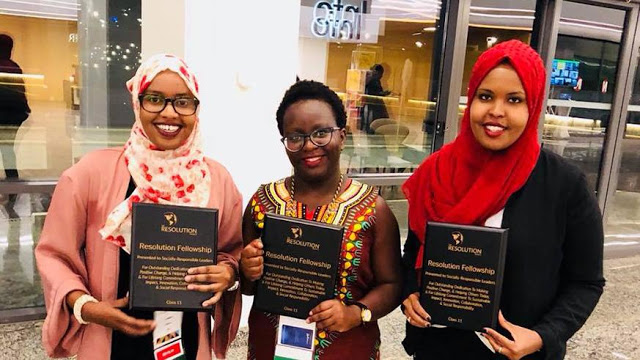 Ubah Ali, 22, has a very personal reason why she is campaigning against female genital mutilation (FGM) in her homeland, Somaliland when she was six years old, her mother told her she would be circumcised the next day, but, although Ubah attended Koranic school, she didn’t know what circumcision meant.

The next morning she was woken up early and taken to the bathroom by her grandmother, who showed her a special dress that had been made for her for the occasion, and she told her to take a shower.

At breakfast Ubah was told to eat pancake but not drink any water. Then at 8am a lady came to the house carrying a box. Ubah didn’t know what it contained – scissors and knives for the procedure – but she was crying anyway. “I knew something bad was going to happen to me,” she recalls.

When the time came, “two girls in the house held me to the ground and separated my legs and my mother held my two hands so they could not move.

The lady circumcised me, with no anaesthetic, no drugs. It was so painful. I cried so hard.

Her family told Ubah she had now become a woman and tied her legs tightly together so that she could not move. She had to lie that way for nearly a month.

The memory of the fear and pain has never left her but today it drives her on. She is trying to do what she can to bring change in her homeland, Somaliland, where 98% of girls are victims, just like her, of female genital mutilation.

FGM or circumcision involves cutting off the clitoris and sewing up the labia to leave only a small hole for urination. Tying up the legs for a period of weeks prevents the hole opening up.

What they were doing was inhumane,” she says.

Ubah’s mission is fraught with difficulty because it means challenging long-held and respected cultural tradition and religious beliefs, as well as highlighting the pain and medical risks FGM can cause.

Somaliland is a self-declared but internationally unrecognised state in the horn of Africa and Ubah comes from the second-biggest city, Burco, in the east, with a population of around one million. Her father was a taxi driver until he had a stroke seven years ago and her mother used to sell clothes from home but now she suffers from too much back trouble to keep the small business running.

Giving back to her community

For Ubah, giving something back to her community has always been a goal. “I felt I had leadership in me from a young age,” she told University World News.

She took an exam to get into high school and while she was there applied for and secured a scholarship in the United States, earning a place at a boarding school in Pittsfield, Massachusetts.

From there a Mastercard Foundation scholarship has taken her to the American University of Beirut, where she is currently in her second year, studying for a first degree in politics.

The Mastercard Foundation Scholars Program is dedicated to promoting a form of transformative leadership. It gives promising students, mostly from Africa, the opportunity to earn a graduate or postgraduate degree and encourages its Scholars to go back and tackle inequity, injustice and poverty in their community or country.

While at university many of them take weekly classes in transformative leadership or attend summer schools or summits of scholars where they share experiences and ideas on social entrepreneurship.

Before university, Ubah set up a small-scale organisation called Hope for Somaliland Community to raise funds for and awareness about the famine and severe drought in her homeland in 2015-17. She was pushed and motivated by her mother and sister.

During her gap year after high school, while she was working at her old school back home, she encouraged students to draw pictures and persuaded a friend from her US school to take the pictures to New York for an exhibition, which raised money to pay for food and water for people suffering from famine in the rural areas of Somaliland.

Then she joined the Mastercard Foundation Scholars Program and last summer she attended a summer programme at Sciences Po, Paris, a partner of the Scholars programme, where they were teaching transformative leadership and “how to start your own business and projects and how to evaluate if you are doing well or not”.

My teacher taught us that when you want to start a project, you first have to have an idea – that is the foundation of your project – but then you must share it because if you don’t, how will you know if it will be accepted by the community [you are trying to help]?,” said Ubah.

Ubah’s idea was in some ways quite simple, to challenge the tradition of FGM in her own community in Somaliland, by raising awareness of the pain and dangers caused and by challenging the myths and beliefs that uphold the practice.

But challenging this culture is fraught with difficulties.

First, breaking it means tearing up entrenched beliefs and tradition. “If in the future you want to get married to a guy, he will ask if you are circumcised and if you say no, he won’t know if you are a virgin or not and no one wants to take that risk,” Ubah explains.

Families support it because it is a way of keeping the purity and cleanness of the girl – because if she gets pregnant before marriage that damages the reputation of the whole clan.

Second, it is difficult to challenge because it is so pervasive. A circumciser in a small village told Ubah this summer that she cuts 30 girls every week – earning enough to send her kids to school and help her family.

So it happens everywhere, in the villages and in the cities, and even families based in the US and Europe, with children born out there, send them back to Somaliland in the summer to be circumcised.

“Women support it as much as men. They will tell you it is good for you. It reduces the sexual needs of a girl. It shows you are a virgin,” Ubah says.

With two other Mastercard Foundation Scholars, Claudette Igiraneza and Kawsar Muuse, she has set up the Solace for Somaliland Girls Foundation, a new social venture committing to eradicating FGM across Somaliland.

The Foundation will set out to increase awareness through education and empowerment of the dangers of the practice, which puts girls’ physical, mental and sexual health at risk.

“The problem is that there are no professional doctors who know how to do it. The family calls an old woman who never went to school and doesn’t know anything about health. She brings her box of scissors and a knife, circumcises and leaves. Sometimes they don’t sterilise anything,” says Ubah.

A botched circumcision can leave a child bleeding to death or dying from infection. If they survive that, they can die later in life, when giving birth to a child – and their child is also more likely to be stillborn.

Many women give birth and the baby dies. Because there is not enough space to come out.

The Foundation’s short-term project will provide one-week of intensive training to 100 youths, 50 parents and 20 circumcisers in three districts, one village and two urban areas.

This summer past, Ubah went home and, working with another girl from Somaliland and two students from Rwanda, interviewed circumcisers and local people to inform the planning of the project work.

In the long-term they hope to train 60 people a year, 20 from each area, and certify them. “They will go back to their communities and spread the concepts, opposing FGM. Then we want 15 to come back and train the cohort,” Ubah says.

“We also want to start anti-FGM clusters in high schools, so that young people are aware of the damage it can cause and will resist – or when they get married they will not let their children go through it.”

There are two big obstacles ahead. One is the cost. Fortunately, in August the campaign earned US$4,500 in seed funding from a collaboration between the Resolution Project’s Social Venture Challenge and the Mastercard Foundation, which will enable the work to begin.

How to overturn attitudes

The second problem is how to overturn long-cherished attitudes. “In Somaliland, the majority of people are Muslim and they associate FGM with Islam even though it is not in the Koran,” Ubah says. “So we will invite people who know about religion and doctors who know about the effects on health and hold workshops once a week in a space in the school I graduated from.”

The challenge of overturning cultural norms cannot be overstated. In many societies where it occurs it is taboo to even discuss it.

In one anti-FGM campaign in rural Senegal on the other side of Africa, witnessed by this reporter, campaigners came up against entrenched and even violent opposition from village elders who did not want their daughters to be left unable to marry.

One part of the solution campaigners eventually found was to seek to persuade seven villages at once to renounce the tradition so that girls would still have potential suitors in their area.

The Solace for Somaliland Girls project will work closely with the Somaliland ministry of religious affairs to help transmit and reinforce the idea that FGM is not a religious requirement.

“We were worried about the marriage thing too,” Ubah said. “Girls usually marry a guy from the same city because they are from the same clan. But the main problem will be to have enough funds because so many people are strict about their cultural norms and it will take many workshops and lots of time. Also, we will have to invite men and boys.”

However, one mind that has already been changed by Ubah’s advocacy, giving hope that the campaign can work, is that of Ubah’s mum.

“My Mum says she wishes she had known better, instead of just following the cultural norms of the country. She now realises it doesn’t matter if you are circumcised or not and that you should give your full support for children and not cut them because a man or culture says so,” Ubah says.

“So I know if I give workshops to parents they will know better, like my Mum did. I don’t want any girl to live through this horrific act. It is something I will remember for the rest of my life. I will never forget it.”