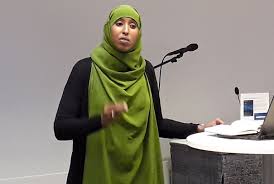 With the support of FCA, psychotherapist Rowda Olad works in grassroots-level mental health care and participates in the reconciliation work in Somalia.

”In Somalia, people talk of invisible wounds, dhaawac yada qarsoon,” says psychotherapist Rowda Olad and describes how shocked she was to see the state of the entire nation’s mental health when she arrived in Somalia in 2016.

”A young boy was driving the moped taxi, tuktuk, at breakneck speed through central Mogadishu. I asked him to slow down. ’You’re going to get us killed!’ I yelled from the back seat. ’What does it matter if we die,’ the boy replied.”

”I was extremely shocked.”

Rowda says she immediately noticed that especially young men were not only fearless but also very angry. But in fact, almost everybody in Somalia seemed to be suffering from psychological traumas caused by the civil war and the violence, or from post-traumatic symptoms resulting from them.

”There is a lot of crime, as well as disregard for other people’s possessions or lives. Whenever there was an explosion in Mogadishu, people rushed to see what had happened, whereas the natural reaction would be to run away.”

”A person who is not afraid is not psychologically healthy,” says Rowda. “Seeing mutilated humans and bodies or victims of explosions is traumatising, especially to children.”

She witnessed and recorded all this during the first year after she and her family moved back to Somalia in 2016.

Psychological trauma changes a person’s world view and behaviour. In Somalia, aggressive behaviour can be seen often in everyday situations.

”Even during high-level political meetings, people may lose their temper at the drop of a hat.”

As a refugee in the United States Rowda, who was born in Mogadishu, has her share of war trauma. The civil war began when she was seven years old.

Her siblings and other relatives scattered all over the world. With her uncle’s family, Rowda fled to the state of Ohio in the United States. She went to school and studied, but once she graduated from high school, she could not decide straight away what she wanted to do when she grew up. So, she volunteered to do social work with AmeriCorps. She helped Muslim immigrants, the Somali diaspora, young and old alike – and saw and experienced lots of things that could only be explained by the people’s backgrounds.

She started a volunteer group for young Somali women and became interested in studying to be a psychologist and psychotherapist. She also became fascinated with facets of Somali culture; what causes things? Why do we do this or think like this?

Rowda studied, graduated, and worked as a psychotherapist. When the situation in Somalia began to settle down and the first post-war parliamentary election was held in 2016, even Rowda decided to move back to Somalia.

Rowda got involved in politics and initially worked in regional administration, but mental health care became more and more attractive. She dreams of founding a national mental health system in Somalia, entailing the entire structure, creating the foundations and the missing words for the work.

”For us, a person is either insane, waali, or not insane. There is no in-between, there are no other words. People who become seriously mentally ill are put in the hospital and forgotten there.”

”It is shocking,” she says.

Mental health care step by step Rowda started her work in Somalia with small steps. She has been engaged in volunteer work and has spoken about mental health to representatives of the Ministry of Health.

”First, my aim has been to open people’s eyes to the role of mental health in people’s behaviour and actions, and from there, I have slowly expanded the idea to the national level.”

Rowda believes it is impossible for reconstruction and national reconciliation work to succeed without dealing with the trauma experienced by families, individuals and entire communities as well.

When people are traumatised, their capacity to function is impaired, which affects things such as their ability to work.

”The productivity of the entire nation, including entrepreneurs and civil servants as well as farmers, remains low.”

Rowda has started her own practice in Somalia, and with the support of FCA among others, has began a form of preliminary mental health care that she calls psychoeducation.

The purpose of the work is to talk about mental health and to provide different population groups with information. Topics include stress, depression, and how to overcome psychological trauma. What is considered ordinary grief and what kind of suffering is bad enough to require treatment.

The work also includes mental health care for prisoners and prison wardens. Inmates in the prisons of Somalia include both petty criminals and former terrorists, and it is important to get them too to commit to the development of Somalia.

”Even in prison, I provide mental health education for groups, during which we talk about how the human mind works. I also do clinical work, give diagnoses, and offer individual therapy to those who need it. Sometimes I have to refer an inmate exhibiting severe psychological symptoms to hospital treatment.”

Working with inmates, Rowda goes through their identity and the paths that led them to prison. Those who grew up surrounded by war and violence may not have the kind of identity that allows them to see themselves as citizens of an organised society.

”For example, when I ask them who their role models are, they don’t say that as a child they wanted to be a doctor or a teacher, but might reply that they admire their father who was a war hero.”

Rowda says that she will soon start working with the families of inmates as well. This is difficult because many families have moved. However, the Somali culture is very family-oriented, and Rowda believes it is possible for criminals to become rehabilitated into society if they receive strong support from their family and community.

Even therapy is a completely new concept in Somalia. There are only doctors and psychiatrists who work in hospitals and prescribe medication. If a doctor gives a person medicine, the person gets better.

”When I tell a patient I am offering them treatment, they expect medication, not discussion.”

She also hopes that mental health issues become part of reconciliation work. Rowda believes there will be no real peace in Somalia before recognising trauma and overcoming it is taken seriously on the national level.