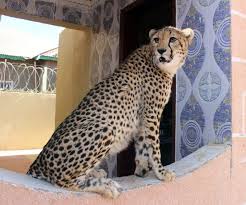 The Cheetah Conservation Fund (CCF) has warned how the growing trend of illegal cheetah trafficking has reached ‘epidemic proportions’, as animals are shipped out of Somaliland to the Arabian Peninsula for wealthy people to keep as pets.

According to the CCF, there are less than 7,500 cheetahs left in the wild, with another 1,000 being held in captive hands in Arabian Gulf countries – where they are bought and sold in illegal online transactions.

Laurie Marker, an American conservation biologist biologist and founder of CCF, told CNN: “If you do the math, the math kind of shows that it’s only going to be a matter of a couple of years [before] we are not going to have any cheetahs.”

CNN reports that many cheetahs – Africa’s most endangered big cats – eventually end up in Gulf Arab mansions, where they are flaunted as status symbols in social media posts. Some were found selling online for more than $10,000 (£8,200) per cheetah.

However, many die during the rough journey from Somaliland – while others may do so within a year or two of becoming captive pets, experts told CNN.

One vet told the news site: “(Cheetahs) do terribly in captivity.”

Marker added: “Those people who have cheetahs as a pet are causing the species to go extinct.”

Speaking to the Middle East Eye a couple of years ago, Kuwaiti cheetah owner Shahad al-Jaber said she bought her pets Mark and Shahad through an illicit network, which smuggled them from Africa in April 2013 and February 2014 respectively – for a little more than $3,000 (£2,500) each.

She said: “They are my babies. I would prefer them to my children if I had any, I’m sure.”

While many countries and states ban the private ownership and sale of wild animals, actual enforcement is much less of an issue.

Jaber explained that while owning exotic illegal in Kuwait, she was not afraid of the authorities as she has ‘wasta‘, a popular term used in Arab countries that means ‘influence’.

She added: “It is very important in Kuwait. If you know somebody who has a good position, then he is going to protect you.”

Shukri Haji Ismail Bandare, Somaliland’s environment minister, said there was only so much authorities could do to stop the source of the trade.

She told CNN: “We have to be stopping the demand from the Arab countries.”

The United Arab Emirates’ Ministry of Climate Change and Environment denied there were cheetahs in the country’s private houses in a statement to CNN.

But Marker has said those in power must do something to raise awareness of the growing issue, saying: “We really need influencers, we need the governments, the kings, the princes or the queens to actually say this is not right.“

She added: “If we can save them, we are going to give them the best life that they can have, but they shouldn’t be in our care. They should be in the wild.”