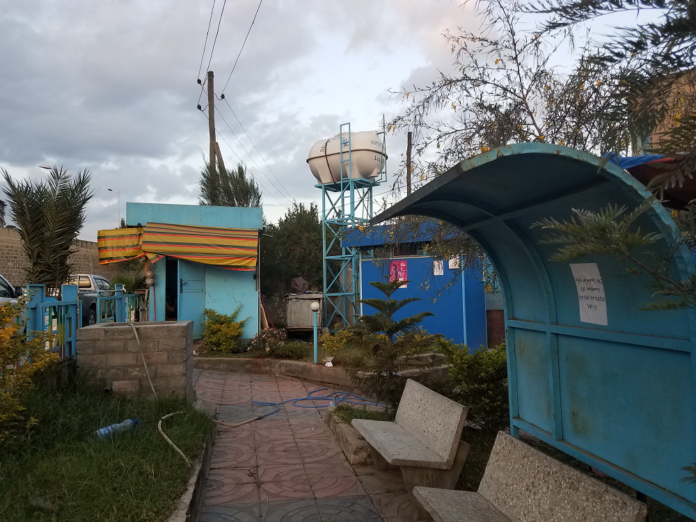 Although the utility AAWSA has over a decade of experience in designing and implementing public and communal latrines, the learning continues as they maintain an adaptive learning mindset and as they integrate innovation in this aspect of their work. Below we present some key learnings from their decade’s journey  of providing improved sanitation services for the population of Addis.

Takeaway 1: Planning – The involvement of the community in a variety of forms plays a central role in the effective functioning of communal latrines. For example, to encourage ownership, the beneficiary communities need to make some monetary or in-kind commitment. Understanding the importance of community ownership, AAWSA went a step further and followed a demand responsive approach, by transferring the management of the communal latrines to the beneficiary communities. AAWSA also found that the ratio of users-to-toilet stalls supports social cohesion: when the initiative was first launched, their communal latrine model was designed to accommodate 3-5 households per toilet stall; as the initiative evolved, however, and AAWSA gained more experience, they found that the optimal ratio for promoting the sustainable use of the shared facilities was  one household per toilet stall, even though the facilities continue to discharge to a pit or single shared septic tank.

Takeaway 3: Design – Public facilities should be designed to be friendly to vulnerable groups, such as the elderly or disabled. Under the program initially, the shared facilities were not designed to be accessible for people with disabilities. However, a member of one of the first public toilet management teams, who herself had limited physical mobility, came forward and proposed adding ramps to the facilities and including additional space in the stalls, which would improve access and allow for a caretaker to assist in bathing and using the toilet. Such design features are now standard for AAWSA’s shared sanitation facilities.

Takeaway 4: Implementation – To draw more customers to the public sanitation facilities, AAWSA has included additional services, such as shower facilities, clothes washing stations, small shops and cafés, thus making them more financially viable. As space in the city’s dense areas is extremely valuable, leading to economic activities being often prioritized over sanitation, AAWSA has learned the importance of combining the facilities with income-generating activities in order to attract more users but also to improve their viability. Likewise, they have learned that the location of the shared sanitation facilities can further promote their use: the clustering of public toilets matters, since those located near market places and connected to the sewer network can subsidize the less optimally located public toilets.

In Bole Woreda 6, a neighborhood of Addis, Worknish Meneri, a widowed HIV-positive mother of 5 children in her 50s, joined a cooperative union to create supplemental income by collecting usage fees for the showers and toilets. While she was happy to have the opportunity, the limited revenue and high maintenance costs make it an unsustainable microenterprise, further evidenced by the high dropout rate of members of the cooperative. Ms. Meneri has consequently inquired about the possibility of adding food vendor services at the sanitation facilities, which is currently not allowed under current regulations due to health safety concerns. Finding creative ways to minimize operations costs will be critical to the viability of the public sanitation facility.

Takeaway 5: Monitoring – Maintaining the quality of the shared facilities requires a clear set of standards and institutions or individuals able to enforce the standards during construction and operation. For the communal toilets, there are no standardized guidelines or rules for their usage once they have been handed over to the households. Similarly, once the public facilities are handed over to the operators, there is no ongoing monitoring and evaluation to ensure the quality of the services provided. This situation arises partly due to the lack of an institution or citizen group with the mandate for oversite or with the funding needed for such oversight. A system in which AAWSA oversees the facilities can be envisioned but would require some rethinking of the overall financial model – both for communal and for public facilities. There are also global examples in which users can hold the services providers to certain standards through, for example, mobile rating systems, but such approaches also require funding and ownership to implement.

Over the past decade, AAWSA has continued to implement a diversity of institutional, financial and technical solutions to help address the challenges of providing shared sanitation services by employing incremental, adaptive, and mixed approaches, which are part of its own ‘Citywide Inclusive Sanitation’ philosophy.