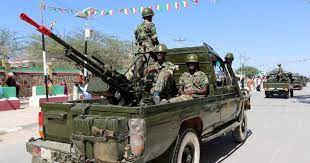 At least two people were killed and five others wounded after heavy fighting erupted between troops of Somaliland and Puntland, local media reported on Tuesday.

The gun battle took place in the contested town of Qararo in Togdher region, forcing residents in the restive rural area to flee their homes.

Somaliland and Puntland officials have not immediately commented on the renewed confrontation.

It came weeks after Somaliland troops seized the town of Bo’ame in Sool region from forces of the neighboring Puntland region, sparking fresh tensions. In response, authorities in Garowe threatened to launch an offensive to regain control of the key town.

Somaliland army chief Nuh Ismail Tani said earlier this month troops of the breakaway state will not sit on their hands if attacked in the border dispute between the two regions, repeating claims by the separatist authorities that Hargeisa has right to bring under its control all the territories under the British Somaliland colony.