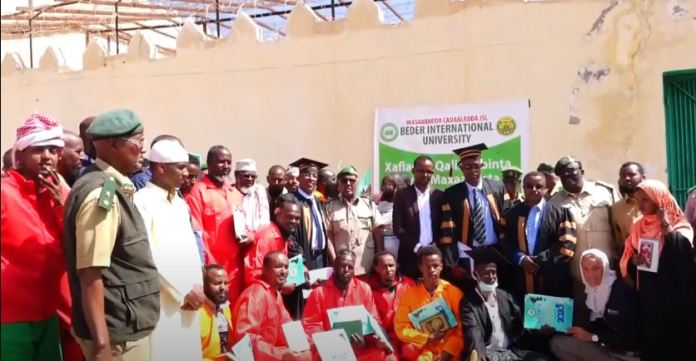 Hargeisa- 132 inmates in Hargeisa Central Prison have graduated and completed their studies in a pioneering milestone feat, in collaboration with Beder University.

The President of Beder University, Prof. Mubarik Ibrahim Aar who addressed the gathering said that the education program is collaboration between the university and the government of Somaliland hence commended the President H.E. Muse Bihi.

These students are graduating at several levels, some with post graduate diplomas, others with vocational skills, and others on basic reading, writing, arithmetic and Arabic, (basic education), & Arabic at diploma level, while others studying basic sharia law.

Speaking at the ceremony, Commander of Custodial Corps Brigadier General Ahmed Awale Yusuf said he was happy to attend the graduation which would go down well in history with Beder University implementing it.

The chairman of the National Human Rights Commission, Mohamed Barud Ali, said it was gratifying that while in prison one had the right to an education that is entitled to, hence hard work must be done.

“As the Ministry of Education we will build rehabilitation centers and prepare everything for the future”, he said.

The Minister of Religious Affairs Sheikh Khalil commended graduate inmates, who are confined for various misdemeanours.

The Minister of Justice, Hon. Mustafa Mohamed Ali, speaking at the ceremony, underlined that they would work to ensure perpetual continuation of such education such that it would be extended to all prisons in the country.

“We promise as ministry of justice to advocate for pardoning, all graduates and those who have depicted rehabilitative conduct as per constitution”, said the minister.

“The message I am conveying here today is that everyone who believes that there is injustice in prison, or people are being persecuted, to witness the ceremony of the graduating prisoners”, added the minister.

Graduates who spoke at the ceremony said they were grateful to Beder University, congratulating their selves, as they took advantage to study, rather than just sitting around in the prison.

“I am thankful to the President H.E Musa who when he was elected promised to increase the knowledge of the prisoners, and it seems that from that time to this day he has been on the minds of the prisoners”, said a graduating prisoner, while adding that, “I was a confused prisoner, but when I started studying I felt like free man”.

On 13th Jan, 2019, The Chairman of the Supreme Court of Somaliland, also Chairman of the Constitutional Court Prof. Adan Haji Ali signed a memorandum of understanding with Beder University President Prof Mubarik Ibrahim Aar and spoke broadly on the details of the agreement between the two parties, including facilitating Judiciary branch and precisely on the process of availing education for inmates in the country’s prisons.