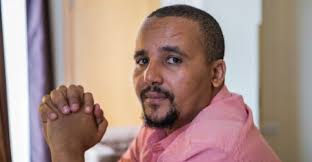 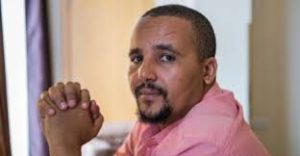 Jawar Mohammed, a prominent Oromo activist and director of the United States-based Oromia Media Network (OMN)returned to Ethiopia in August after the country withdrew coup plotting charges it had filed against him in 2017

Jawar Mohammed was once so hated by the Ethiopian state that the media activist was accused of coup plotting while viewers of his anti-government broadcasts were hunted down.

Yet today he hosts politicians and diplomats in his hotel room in the Ethiopian capital, and enjoys the protection of government-supplied bodyguards.

The dramatic change in Jawar’s fortunes mirrors the breakneck reforms implemented in recent months by Prime Minister Abiy Ahmed, who has sought to open up his repressive nation.

To his supporters, Jawar is a freedom fighter who through his US-based Oromia Media Network (OMN) promoted protests that rocked Ethiopia’s ruling party and led to Abiy’s rise.

In Ethiopia, there is scarcely a more polarising figure, a role for which Jawar makes no apologies.

“Who cares?” he told AFP in a recent interview. “I don’t regret a single day. I wanted to bring down the bloody government that was killing my people.”

Abiy came to power in April after the resignation of his predecessor Hailemariam Desalegn whose last years in office were defined by anti-government unrest and nationwide emergency declarations.

That the protests happened where, how and when they did was no accident, Jawar said.

“We planned it. The people who were organising the protest and the people who were in OMN are almost the same,” said the 32-year-old, wearing a pink shirt and hotel slippers as two mobile phones periodically vibrated on a nearby table. 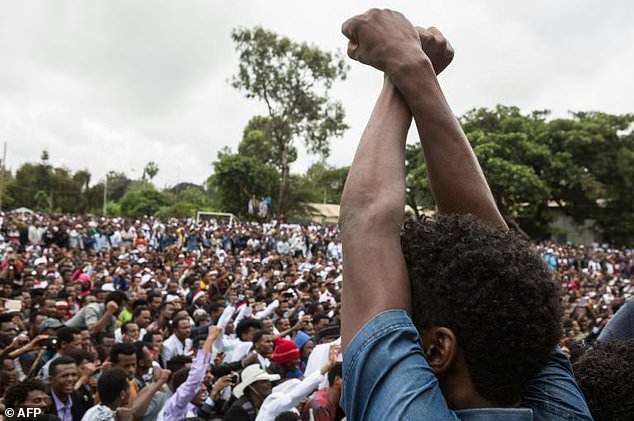 People protest against the Ethiopian government during Irreecha, the annual Oromo festival

Jawar used his media network to coordinate protesters from his Oromo ethnic group against the Ethiopian People’s Revolutionary Democratic Front (EPRDF), a coalition of four ethnically based parties that has ruled since 1991.

Their target was the powerful Tigrayan faction of the coalition which they accused of squashing dissent and marginalising the Oromo, the country’s largest ethnic group.

While Ethiopian state media was busy downplaying the unrest that began in 2015, Jawar gave it heavy coverage.

Based in the US he kept Ethiopian hours, staying up all night to share photos and updates from the protests with his Facebook followers, which today number over 1.4 million.

Jawar calls himself a “microphone” for the Oromo youth who spearheaded the sometimes violent protests.

By 2016, protesters from the second-largest ethnicity, the Amhara, had joined the revolt.

Commentators accused him of inciting violence against Tigrayans and other ethnic groups, while plainclothes police officers in Oromia prowled neighbourhoods, arresting people for watching OMN.

In the US, Jawar said Ethiopian agents rented offices adjacent to his in Minneapolis, blasting loud music to disrupt his recordings.

The protests, Jawar said, were part of a bigger plan to shift power within the EPRDF away from the Tigrayans to the Oromo Peoples’ Democratic Organisation (OPDO), which represents the ethnicity in the coalition.

“We worked tirelessly and systematically, strategically, with the OPDO to empower the reformist forces, and we succeeded beyond our imagination,” he said.

OPDO officials did not respond to requests for comment.

His coup de grace came when he promoted a strike earlier this year that shut down roads and businesses on Addis Ababa’s outskirts.

Not long after, Hailemariam resigned and Abiy, a fellow Oromo from the OPDO, was appointed leader.

While discord within the EPRDF played a significant role in Abiy’s rise, Befekadu Hailu, a blogger repeatedly jailed under Hailemariam, said Jawar seized the moment to take on the fundamental role of “de-facto mouthpiece” for the protesters.

“He’s one-of-a-kind, but I don’t really believe in one man’s absolute power,” Befekadu said. “If he was not there, other people would have dominated social media.”

Jawar counts Abiy’s election as a victory both for Oromos and the country at large.

“We fought as an Oromo and we won as an Oromo. We will build an Ethiopia that is good to Oromos and good to everybody else,” he said.

Last month, he returned to Ethiopia after charges of plotting a coup, filed in 2017, were withdrawn. Jawar now wants to turn his OMN into an independent media outlet, the BBC of Ethiopia as he puts it.

But some doubt he can shake off his reputation for ethnic nationalism and tight personal control.

“The way OMN is going [will] be decided by one person,” namely Jawar, said Solomon Ungashe, a founding board member who left after a falling out. “This is not going to be an independent media.”

Jawar, meanwhile, is unbowed and disdainful of his critics.

“For those who are sceptical, let them be sceptical and wait until we deliver,” he said. “They thought I was going to destroy this country. No, we built it.”