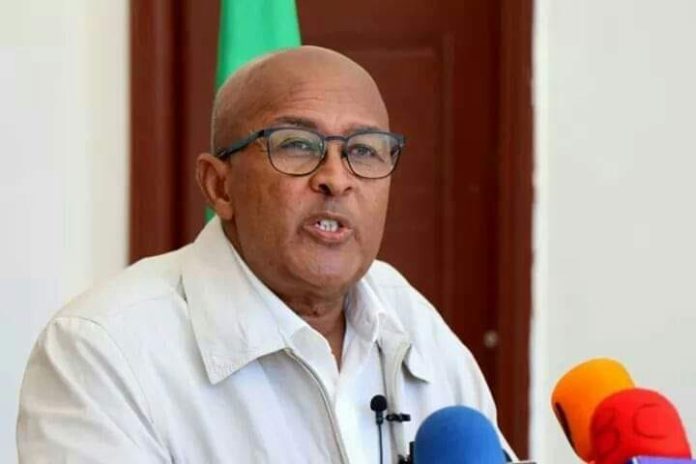 The party leader of Somaliland’s Wadani Party had accused President Muse Bihi of violations of the political agreement on the electoral commission that was brokered by the international community in July this year.

The chairman of the party Abdirahman Mohamed Abdillahi Irro in a press conference at his residence in Hargeisa said his party will withhold the nomination until the government rectifies the violations of the nomination process and the agreement of the political parties brokered by the European Union.

Waddani alleges the members nominated by the president to the independent electoral body include people affiliated with political parties. The party also objects the renomination of Kaltun Sheikh, a member of the current electoral commission.

The party leader of Somaliland’s Wadani Party Abdirahman Irro accused President Muse Bihi of violations and gross misconduct towards the recent political parties agreement.
Mr Irro said President Muse Bihi’s integrity is questionable because he does not keep his words when the stakeholders come to an agreement.

The three national parties in Somaliland recently signed a historic deal in which they settled election disputes, and arrived at an agreement which is to see the formation of new SLNEC members.

However, Waddani Party Abdirahman Inro said his party will not take part in the parliamentary and local elections if the proposed members of the Electoral Commission are to stay.

The members of the House of Representatives, the main law-making body of the country, were elected in 2005 for one term of five years. Contrary to the constitution and the will of the people, they are now serving third consecutive terms, he added.

President Bihi selected three individuals to include the seven-member of the electoral commission, but the opposition is contesting the selections for different reasons.

The President selected Ms Kaltuun Sheikh Hassan Abdi, who is a member of the current controversial electoral commission.

Where another nominee from the president is Abdirashid Mohamud Ali (Riyo-Raa) ex-deputy minister in the past Kulmiye government under Ahmed Siilaanyo. The opposition is accusing him of being a member of the KULMIYE party that participated in the last election campaign.