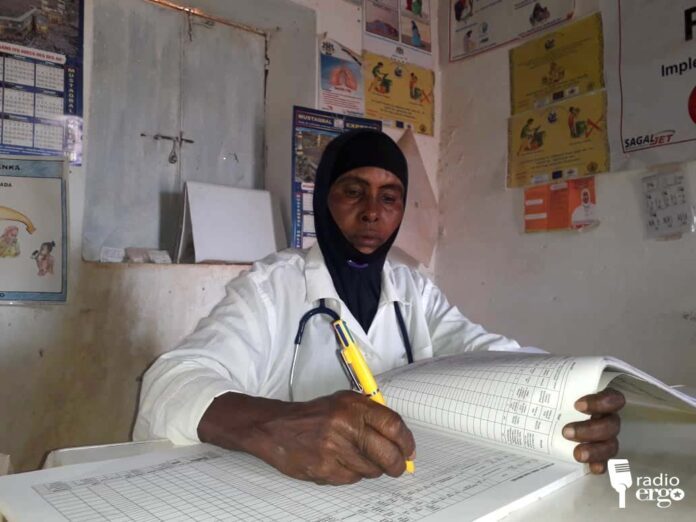 Saynab Abdi Warsame, a midwife, has devoted almost 30 years of her life to providing lifesaving care to women and children in the northern Somali town of Hingalol.

Saynab, who graduated from a nursing school in Buran, Sanag region, in 1988, has never earned a salary for her work, which she sees as a vocation.

“My aim was always to target poor people, IDPs, and minorities. Their happiness was my happiness because my ambition was to save their lives,” Saynab told Radio Ergo.

Saynab’s career began when she saw that the only health post in Hingalol was serving hundreds of people from the town and surrounding villages but was not able to offer care for pregnant women or children and had no trained midwives.

She used to visit the homes of patients who could not get treatment at the centre, especially expectant mothers and sick children.

“I started work at my house without a salary and with no support from anywhere,” she told Radio Ergo.

Saynab started working at the only hospital in Hingalol in 2004. It was getting somesupport from local NGOs at that time, but funding soon ended, meaning there was no money to pay staff salaries.

Saynab, a mother of three, is now the head of the hospital, where she manages 11 other volunteer staff.

“I work here for six hours but afterwards I go around the suburbs to visit the families to see if there are sick people who need my help,” she explained.

Saynab and her team have to refer complicated cases to larger hospitals in Erigavo.

“The world has changed. Phones and cars have helped us very much. Serious cases like pregnancy complications and very sick people are referred to big hospitals for further treatment,” Saynab noted.

Saynab has trained many women from different parts of Hingalol on creating awareness of the importance of delivering their babies at the hospital.

She has been the only midwife helping mothers in the IDP camp in Hingalol for the last two decades.

Now there are mothers and their daughters, two generations, who were midwifed by Saynab and cherish her for her commitment.

“I am now helping the next generation whose mothers I had helped. I met their mothers delivering and today they come to deliver here,” said Saynab.

Among the children born with the help of Saynab is Amina Ahmed Abdullahi, 20, who is now a mother herself.

“I have to thank her for what she did for me and my mother. I respect her like my mum, people of this town owe her a lot,” said Amina.

Amina, who is studying medicine, sees Saynab as a role model and wants to follow in her footsteps:

“People work for money but she decided to sacrifice her time and service to the people of this town. Nobody can compare to her in what she has done for this town.”