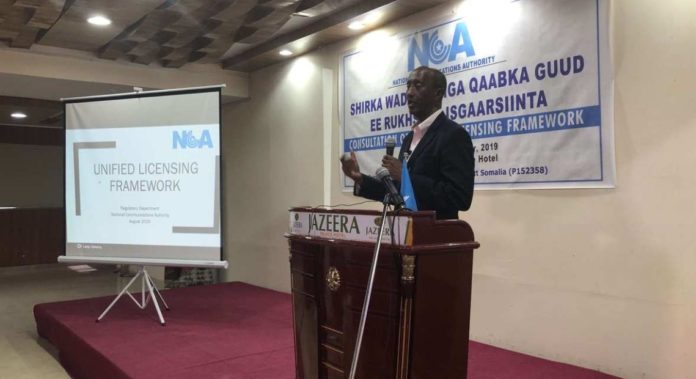 The draft Unified Licensing Framework (ULF) would allow the provision of multiple services through the introduction of service and technology-neutral licenses that would promote innovation and consumer choice.

In addition to categorization, the regime also comes with terms and conditions that the relevant licensees are required to comply with.

In his opening remarks, NCA’s General Manager, Abdi Sheik Ahmed, said ULF is a product of year-long discussions and benchmarking with several countries in Africa and Asia.

He said “We wanted to start from where the global trend is now. Therefore, our ULF does not only take local context into consideration, but also has a forward-looking vision to encourage our companies to compete globally.”

The participants applauded the salient features of the new regime and may bring an end to uncertainties in one of the most developed sectors of our economy as lack of formal licensing system created chaos in the sector and hindered further investment into the sector.

Somalia did not have an official licensing regime since the state-run telecom operator ceased its operations in 1991.

The draft Licensing Framework is the latest of interventions to regulate the sector as part of its economic reform agenda of the Economic Development Pillar of the current government. Other regulations developed include numbering and interconnection, which will soon be implemented.

As NCA’s transparent consultation process, the draft ULF and its accompanying documents are posted on NCA website and stakeholders have until December 5th to comment on them.