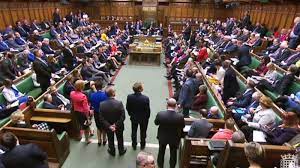 The debate for official recognition of Somaliland as state will be raised in the UK parliament tomorrow.

The debate will be led by Mr. Gavin Williamson, the former defense secretary of the UK who paid an official working visit to the republic of Somaliland at the beginning of early 2019.

MP’s will hear a call for a coordinated initiative spearheaded by friends of Somaliland in the UK.

SL Foreign Minister has commended the efforts of Mr. Gavin to bring Somaliland’s recognition to the UK parliament in a statement posted on the official twitter page of the ministry of foreign affairs of Somaliland.

The statement urged all Somaliland diaspora community in the UK to rally behind the efforts underway spearheaded by Gavin Williamson, who is a staunch supporter of Somaliland state.

The @somalilandmfa is aware of the adjournment debate on the 18th of January at the UK Parliament regarding Somaliland recognition.

The MFA urges Somalilanders in the UK to get in touch with their respective MPs. We are grateful to the former UK Defense Secretary #GavinWilliams