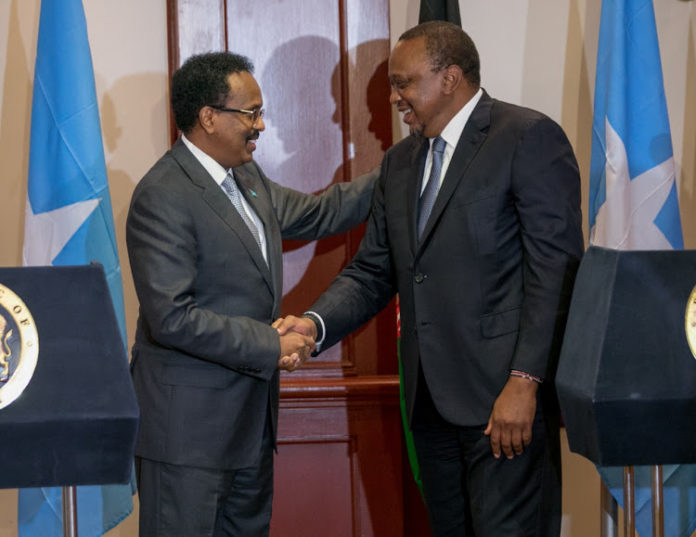 Presidents Uhuru Kenyatta and Somalia’s Mohamed Farmaajo have committed to safeguard Kenya-Somalia bilateral relations despite the divisive maritime dispute before the International Court of Justice.

Foreign Affairs CS Monica Juma said in a statement on Thursday that President Farmaajo “expressed his confidence that the ICJ issue would be resolved in a mutually acceptable manner and not affect our bilateral relations.”

They also restored issuance of travel visas on arrival arrangement for citizens of the two nations.

Additionally, the two leaders agreed to restore direct flights from Mogadishu to Nairobi in a week.

Uhuru met Farmaajo at his hotel, rather than State House, where he has been receiving other dignitaries.

Uhuru met and discussed Kenya-Somalia relations on the sidelines of the ICPD25 summit that ended on Thursday.

“They [Uhuru and Farmaajo] reaffirmed the invaluable relations between Kenya and Somalia as neighbours.”

“The two principals agreed to bring normality to our bilateral relations and do everything to ensure peaceful relations including obtaining visas on arrival to encourage free movement of our people,” Juma said in a tweet.

Mid last month, the ICJ for the second time this year postponed the maritime delimitation case to 2020, a move that was widely seen as a tactical and strategic move by Kenya to push for an out-of-court settlement.

This was after Kenya’s Foreign Affairs CAS Ababu Namwamba met Somalia Prime Minister Hassan Khaire on October 2 in a follow up to the New York talks between Uhuru and Farmaajo.

This was under the chairmanship of Egyptian President Abdelfatah Al Sisi, who is the AU chairman.

The two leaders had met on September 24, but Somalia had insisted the rapprochement would not affect the ICJ case.   Through Somalia Presidency’s director of communications Abdinur Mohamed, Mogadishu said they had agreed to work towards normalising relations without any implications for the maritime case at the ICJ.

At the time, a Kenyan-Somali committee to negotiate the maritime border dispute was formed. The committee would start working towards “adopting measures for restoring confidence and resolving all problems so as to normalise bilateral relations”.

External pressure cannot be ruled out of these developments. US Ambassador to Kenya Kyle McCarter just last month told a local daily that the dispute “has to be addressed quickly.”

“We have been working to get President Farmaajo and President Kenyatta to come to the discussion table. I’ve been to Mogadishu to speak to the Somalia resident. I told him to pull off the court case,” Ambassador McCarter said.