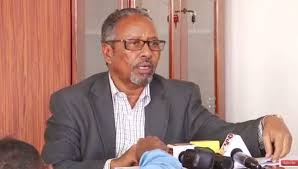 A senior Wadani opposition party has explained the reasons for abstaining the attendance of a meeting that was organized by Somaliland’s National Electoral Commission.

Mr. Aidid put an accusatory finger on NEC which is blamed for the postponement of the upcoming polls in Somaliland.

He reiterated that the upcoming elections won’t transpire in the country in regard to the date that has been fixed.

He also alleged that the ten month given NEC to prepare all necessary preparations for smooth elections in the country is probable.

In addition, he put also the blame of the current election stand off that the gov is solely responsible and will be held accountable for the delays.

The current Somaliland parliamentarian who served as ministerial portfolio during Silanyo’s regime argues that NEC which administered 2017 presidential polls were a lot of irregularities marred the voting process cannot be trusted to oversee a flawless election this time around.

He echoed his party’s stance on NEC which is to immediately disband them and start the creation of brand new NEC that will be neutral to all political parties in Somaliland.

Wadani party which is Somaliland’s main opposition party said that unless their demands are met that they cannot participate in the coming elections.

The party submitted a formal request to the president, Kulmiye and UCID parties demanding the immediate disbanding.

It was on Thursday when NEC held a meeting where they put forward an upgraded voter registration to the election stakeholders in Somaliland but Wadani has rejected to send officials to the gathering.

The fear of political analysts is that the country cannot hold two party polls where the main opposition party is out of the ballot.