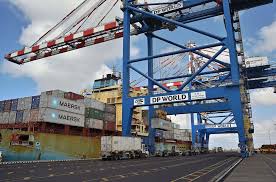 Terra Drone Europe, a group company of Japan-based Terra Drone Corporation, has successfully completed a high-resolution photogrammetric pavement assessment using a multirotor drone at Djibouti’s key port of Doraleh. The five-day aerial survey was accompanied by detailed inspections of the quay walls and the sea defense revetments at the Doraleh harbor.

The data acquired by Terra Drone Europe will be used in conjunction with previously-collected bathymetric data, by Deep B.V., to offer a holistic view of the condition of the port – both above and below the waterline. With this survey, Djibouti will be able to identify the high and low spots of the harbor pavements – an important aspect since the port has proven to be susceptible to flooding. The topographic data will further be used to plan and propose a new drainage scheme to the port owners. The aerial photogrammetric pavement assessment will also be used to inspect the overall condition of the port.

Traditionally, this kind of survey would have been conducted using a leveling device. That technique would have taken a lot of time and yielded only one point per five meters. The drone survey, on the other hand, produced over 20,000 height measurements per square meter.

This project was commissioned to Terra Drone Europe by engineering consultancy firm Royal Haskoning, which has been employed by the Djibouti Main Ports to provide a condition report of the multi-purpose Doraleh port. The construction of the port was completed three years ago, and since then, there have been noticeable changes in the condition of some of the assets. The report which will be generated utilizing aerial survey data will be handed over to the contractor responsible for the port construction as part of the ‘defect notification’ activities.

How the survey was conducted despite several challenges

A multirotor drone was flown at an altitude of 75 meters to provide an agreed-upon ground resolution of 0.8cm. The challenge associated with this activity was that the height of container cranes at the site was even more than the height at which the drone was to fly. Depending on the position of the boom, these cranes could go up to 85 meters.

While these cranes posed a collision hazard for the drones, the areas underneath them were one of the major points of interest and could not be avoided. To ensure safe flying, all cranes had to be moved to one end of the rail while the drone surveyed the cleared-up area, and vice versa.

For the inspection of the quay walls and sea defense revetments, the drone was flown at 35 meters to deliver data with a ground sample distance of less than 0.5cm. This survey needed to be done both during low tide and high tide to obtain a proper overlap between the two datasets.

Since the port was operational throughout the survey, berth occupancy became an important factor of consideration. On two occasions, the vessels had to be moved from one berth to another to allow the survey to be completed.