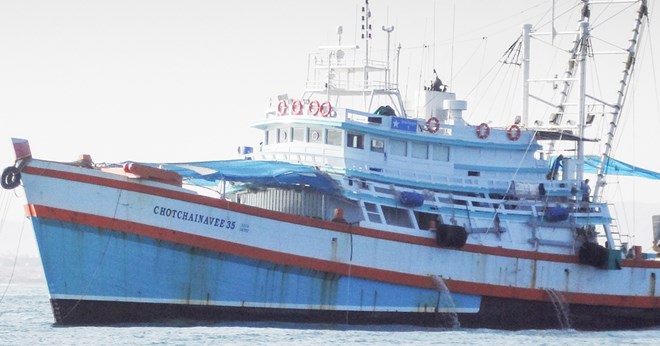 Thailand’s criminal court has handed down a guilty verdict, and fines totaling over $16 million, to six defendants accused of operating an illegal vessel in Thai waters.

The law calls for a fine of up to THB 30m, or five times the value of the illegal catch, whichever is higher. Each defendant was therefore fined THB 131.2m ($4.1m). However, since they gave useful testimonies, the defendants’ sentences were reduced by one third, taking the fines down to THB 87.5m each. The court also ordered the seizure of the fishing vessel and its catch.

The criminal proceeding against Chotchainavee 35 was the result of a joint operation undertaken by the Command Center for Combatting Illegal Fishing (CCCIF) and the Royal Thai Police on May 2, 2015. The owner of the vessel claimed that it was registered in Djibouti, however, the Thai authorities had been keeping track of the vessel and suspected that Chotchainavee 35 had illegally fished in Somalian waters.

Since the owner of the vessel could not provide clear evidence that the catch on board was obtained legally, the Department of Fisheries subsequently issued an order to confiscate the vessel, its catch, and all assets on board. The Thai authorities also found out that the vessel was stateless since Djibouti had revoked the vessel’s registration.

Apart from the criminal proceeding against Chotchainavee 35, the relevant Thai authorities have also uncovered a connection between Chotchainavee 35 and two other vessels, namely Chotpattana 51 and Chotpattana 55. The three vessels were all formerly Thai-flagged and belonged to the same company owned by a group of Thai nationals.

Later, the vessels withdrew their registrations from Thailand and obtained Djibouti flags to fish in Puntland waters, which is part of the Federal Republic of Somalia. On Nov. 1 2018, Thai authorities led by CCCIF, anti-human trafficking investigative officers and the Special Arrest Team arrested the captains of both Chotpattana 51 and Chotpattana 55 in the Maldives on charges of trafficking of Cambodian laborers.