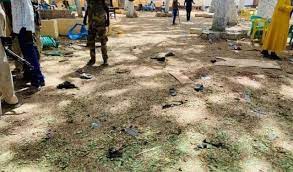 At least 10 people were killed and 15 others wounded on Saturday in a suicide bombing at a tea shop near regional headquarters and presidential palace in the central Somalia town of Baladweyne, VOA Somali reported.

Patrons, who included politicians and elders, had gathered at Hassan Dhif tea shop for a meeting on upcoming parliamentary elections shortly before a bomber blew himself up. The cafe shop is popular with meetings between local officials and traditional leaders.

No one has immediately claimed responsibility, but the Al-Qaeda-linked militant group Al-Shabaab often carries out bombings and the other attacks targeting government officials and AU peacekeepers in south and central Somalia.

The blast comes ahead of a trip to the town by former spy chief Fahad Yasin whose alleged attempts to occupy a parliament seat, which is currently held by a critic of the current administration, by armed force triggered division among election officials.

Parliamentary votes are due to kick off in the town on Sunday. Unlike other candidates, Mr Yasin’s election is expected to be held inside a heavily fortified area in Baladweyne airport.