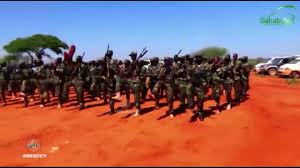 The demobilized former SSC rebel faction has been relaunched in Buhodle today and announced it is taking arms once again.

The faction which compromises from Sool, Sanaag and Ayn regions have declared to wage war against Somaliland occupation.
The rebel movement in Somaliland stopped its warfare with the gov’t after it’s former leader, Suleiman Isse Ahmed signed a peaceful accord with ex-president Silanyo. It’s ex-leader served in a ministerial post during Silnayo’s regime.
The relaunching of the movement is interpreted as it is  heavy blow to Somaliland’s peace that certain areas in the eastern parts of the country enjoyed over the past years.
The rebel movement has said that the emancipation of Somaliland which has occupied the territory against the will of its people is the number one priority,
Politicians, traditional elders and diaspora community played a huge role in the rebirth of the insurgency.
SSC commander by the name of Mohamed Ahmed Ali said that they stoop up for their unity and freedom.
He urged all former rebel members across the regions to support the movement.
The leader of the movement is identified as Abdi Husein Ali. Somaliland military and the ex-SSC rebels movement had skirmished in the provinces which had left behind displacement of people and human casualties.