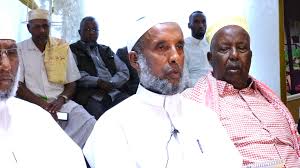 The Mediation Committee tasked to find a common ground between Somaliland government, the ruling Kulmiye party and the two main oppositions have issued several resolutions which will bring an end to the protracted political impasse in the state.

Today, the mediation council compromising of businessmen elders and religious leaders have held a press conference and announced the following points as the best way to bring the squabble to and end once and for all.
1. The mediation council have suggested that the newly formed National Election Commission (NEC) must be disbanded with immediate effect.
2. They have called upon the government to reinstate the former national election commission.
3. They have urged the opposition groups to refrain from any acts that may put the country’s national security into jeopardy. They have further called on the opposition groups to respect the authority of the president, the council of ministers and the legislative bodies.
The two sides have not so far spoken of the resolutions issued by the mediation council which was tasked to end the wrangle.