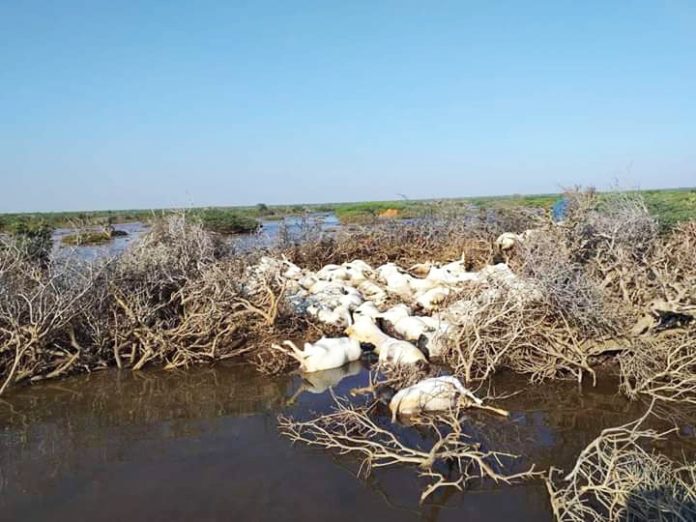 On December 6, Tropical Storm Pawan hit the coast of Somalia, bringing strong winds, and heavy rains to the Puntland district. The impact is far from over. According to the UN’s Office of Humanitarian Affairs, the storm and the resulting flash floods have caused six deaths, displaced 4,800 people from their homes, and robbed more than 32,000 people of their livelihoods.

In Eyl, one of the rural coastal towns in this northeastern area of the country, the government issued warnings, but residents had only a short time to evacuate their homes. In just two days, Pawan dropped more than 10 inches of rain onto the town and its people.

“Our homes have flooded and we had to move to higher grounds. I lost all my livestock and I have nothing left. There is also a shortage of clean water in the area and we don’t have sufficient food. We are in need of immediate assistance,” says Hawo, a woman in Eyl.

According to the latest update issued by the UN Food and Agriculture Organization, the extreme weather conditions have destroyed roads, buildings, and boats. In Eyl alone, more than 1,200 families were affected when the heavy winds and rains destroyed infrastructure, water canals, and more than 200 farms. Hundreds of livestock – the primary source of livelihoods for many in this area – have been killed.

More than 40 water points, mainly shallow wells that were recently rehabilitated by Action Against Hunger, have been buried in the ground. The main road that leads to Dawaad and Badey village was washed out, leaving residents with just two options to get supplies: to walk for long distances or to travel by sea. While the area health facilities were not affected and are still operational, many families have no way to reach them and the services they provide.

“Our teams are conducting a rapid impact assessment to measure the damage and to understand the needs of the communities,” Action Against Hunger’s Country Director for Somalia, Ahmed Khalif, said.

“Right now, the most urgent needs are for the most vulnerable people, such as young children, and sick and elderly people,” Khalif continued. “They need food, clean water, blankets, shelter kits, clothing, water treatment packages, mosquito nets, and supplies to prevent disease outbreaks.”

While this storm has subsided, rain is predicted to keep falling in coming days as residents continue to count their losses. Eyl is no stranger to flooding – or extreme lack of rain: In June, flash floods destroyed farms in Dawaad and Badey villages. Since then, residents have been grappling with a long dry season, forcing herding families to move to other areas in search of water and pasture.

“With few resources at their disposal, the only way families can survive these weather disasters is by moving. Livestock are often families’ only assets, and they will do everything they can to keep them alive,” said Khalif.

Through our livelihood projects, Action Against Hunger is helping families in Eyl adapt and absorb to shocks during long periods of drought. We support village savings groups, which help community members save their earnings and provide small locally-managed loans during emergencies. While our health and nutrition teams focus on keeping children and their parents healthy, some of our resilience projects also help promote animal health and prevent the spread of disease among herds.