The obstacles to actual recognition still seem insurmountable — unless Somalia relents and regional bodies give their blessing.

Somaliland is increasing its push to win international recognition as an independent sovereign state which it has proclaimed for itself — and indeed successfully practised — for the past 30 years. But will these efforts to attain an ambitious goal pay off?

The chances, unfortunately, seem rather slim. Even though in many ways Somaliland deserves recognition as a separate state from the chaotic and largely violent remainder of Somalia.

On 31 May Somaliland, which lies to the northwest of Somalia, sandwiched between it, Ethiopia, Djibouti and the Gulf of Aden held its second legislative elections. The two opposition parties, the Somaliland National Party (Waddani) and the Justice and Welfare Party (UCID), won 52 seats in the 82-seat legislature. They announced they would form a coalition to oust the ruling party, the Kulmiye Peace, Unity and Development Party.

The results were in many ways perfect for Somaliland’s cause. The elections unfolded peacefully and were deemed free, fair and credible by South Africa’s private Brenthurst Foundation. The foundation sent a team of monitors, including several African opposition leaders, to scrutinise the polls. Somaliland’s democratic credentials aren’t impeccable, but the opposition victory boosted the country’s claim to be worthy of recognition.

Somaliland parted company from Somalia 30 years ago, in 1991, after fighting a very destructive war of independence against the brutal Somali dictator Mohamed Siad Barre. Without the usual observers such as the African Union (AU) and European Union, inviting the Brenthurst Foundation and another monitoring mission of the University College of London was part of Hargeisa’s strategy to win international support.

To date only Taiwan — itself a barely recognised state — has endorsed Somaliland’s status as a sovereign country, and even that is rather tentative. South Africa has for years been one of the targets of Hargeisa’s international campaign for recognition, and it has enjoyed some success. Important interests in South Africa’s ruling tripartite alliance back its cause.

The South African Communist Party appears to have publicly backed Somaliland’s independence, leading a South African fact-finding mission there in December. But South Africa’s government is so far not budging. It would not grant visas to two senior Somaliland officials to attend the Johannesburg conference, nor will it give passports to Somalilanders.

Pretoria has told Somaliland that if it wants recognition, it should start closer to home with the Intergovernmental Authority on Development (Igad). But Igad is unlikely to be well disposed, given several of its members’ concerns about Somaliland secession creating a precedent for other restive minorities.

Officially Pretoria isn’t persuaded by the 2011 precedent of South Sudan seceding from Sudan. It believes that South Sudan was always distinct from Sudan — ethnically, culturally and religiously — whereas Somaliland is barely distinguishable from Somalia in these respects.

Some countries further afield are more sympathetic to Somaliland’s cause, notably Britain, the former colonial power. Hargeisa bases its legal case for independence, in the AU court as it were, on the historical fact that it was, before 1960, a British protectorate while Somalia was an Italian colony.

That meant that at independence the two states were separate, although they merged days later. Nevertheless, Somaliland argues that due to that moment of separation, it doesn’t violate the AU position against disturbing national boundaries inherited from the colonial era.

But neither Britain nor any other non-African nation is likely to risk offending Africa by taking the lead on so sensitive an issue. That means Somaliland’s fate remains in the hands of the continent.

Within the Brenthurst Foundation’s election monitoring team, there was some suggestion of Somaliland using its ties with the United Arab Emirates — which is helping it rehabilitate Somaliland’s Berbera Port — to encourage Egypt to make Hargeisa’s case in the AU.

That case would probably rely on the report of the AU fact-finding mission to Somaliland in 2005. It noted the country’s separate colonial history and unhappy 30-year union with Somalia. This meant Somaliland’s quest for recognition was “historically unique and self-justified” and that the AU should “find a special method of dealing with this outstanding case.” But heads of state evidently didn’t agree.

And so Somaliland’s bid for recognition rests on Somalia abandoning its claim to what it regards as its renegade north-western province. If so, Igad, the AU and the wider world would follow suit.

Common sense and ethics suggest that Somalia should acknowledge the reality of Somaliland’s independence, proven over 30 years of separate and relatively successful existence. Somalia’s centre can barely hold with its current constituent parts. Having another one, with such strong centrifugal tendencies, would surely be entirely too fragmentary.

Yet Somali observers insist that the desire to bring Somaliland back into the fold runs strong across all sectors of society. This is a reminder that state sovereignty and territorial integrity are matters much more of the heart than the head. DM 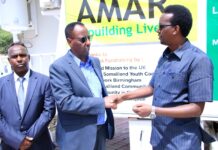 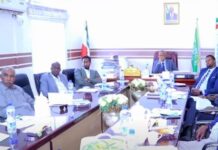