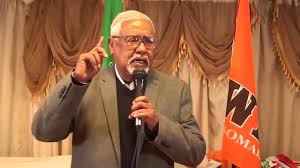 That was revealed by the interim Chairman of Wadani Party, Honorable Abdikadir Ismail Jirde in a party meeting in London in the UK.

Abdikadir Jirde said the issue was raised in the meeting for the top party brass officials after considering deliberation the interim chairman said that the proposal was turned down.

Mr. Jirde said the party leader sought the decision will have precipitated the death of Wadani party.

The big reveal came in a conference the party organized for its members and supporters in the UK.

The meeting was attended by tens of diaspora members and supporters of the main opposition party on Monday evening.

In another subject, Abdikadir Jirde called for the closing issue negotiation between Somaliland and Somalia.

He alleged blocking Somaliland recognition ambition is the second priority for the Federal Government of Somalia.

In another front, All Wadani party officials welcomed the historic accord that peacefully ended conflict in Sanaag region in the past few weeks.

Wadani leader commended the peace accord in Eil Afwein district and the disbanding of Arre’s rebel insurgency.